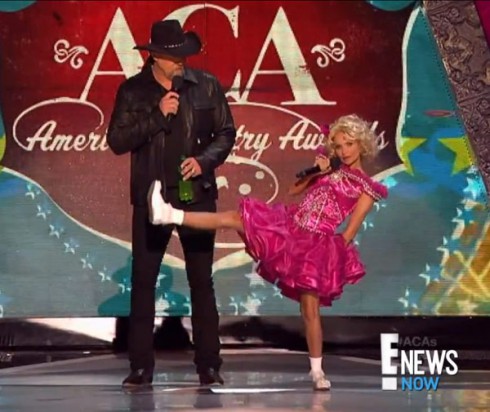 The somewhat diminutive Kristin Chenoweth hosted last night’s American Country Awards alongside her more-than-somewhat towering co-host Trace Adkins and the duo had fun with their varying statures all night, including an opening sequence in which Trace carried Kristin out in a baby sling. But perhaps the highlight of height hi-jinx was when Kristin Chenoweth came on stage as Here Comes Honey Boo Boo star Alana Thompson! 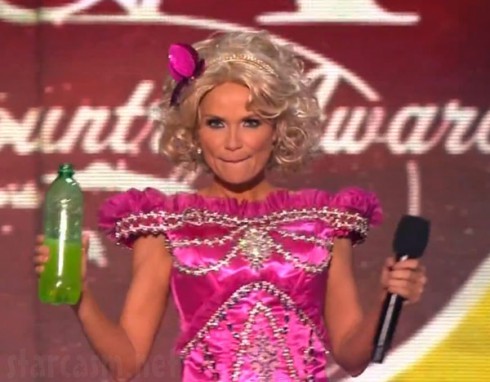 Kristin was sporting a pageant-worthy pink dress very similar to the one made famous by Honey Boo Boo on Toddlers and Tiaras, and later by her Mama June on Anderson. Kristen was also toting a large bottle of “Go-Go juice” as she pranced about the stage making caustic Honey Boo Boo inspired comments like, “Uhhh! My underpants is stuck up muh butt!” 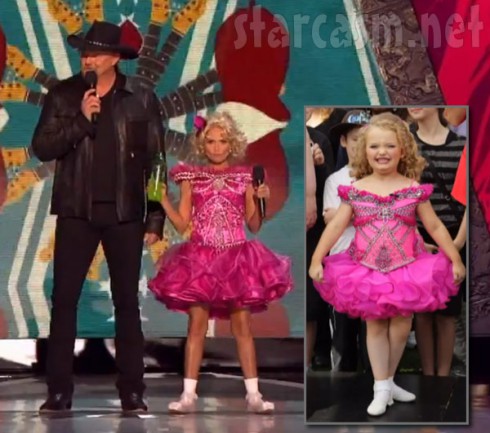 Trace handled it well, responding to Kristin’s wedgie announcement by telling her flatly, “I’m not helping you with that.” He then turned to the audience in a moment of sentimentality and observed, “Kids are so precious, aren’t they?”

Here are a couple clips from the brief skit, beginning with the E! News report about it followed by a video from TheACAs.com: