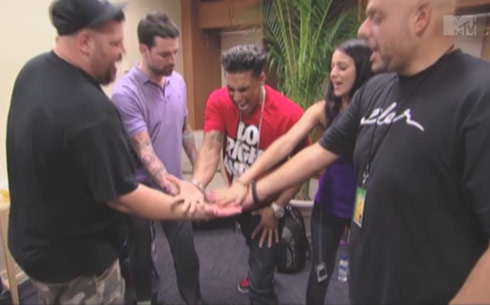 MTV is gearing up to see what damage they can do with spin-offs from their globe dominating reality series Jersey Shore. They got JWoww and Snooki ready to do their thing but first up is Pauly D and his entourage in The Pauly D Project.

The show follows Pauly D as he looks to capitalize on his Shore success and translate that in to a burgeoning DJ career. Along for the ride is a posse that includes his spinner-mentor Michael “DJ Biggie” Morgan and his body guard / homeboy Gerard “Big Jerry” Gialanella. We did some character profilin’ in a previous post which I encourage you to check out here.

Any which ways, here’s the super trailer for The Pauly D Project:

Personally, I love the fact that Pauly straight up acknowledges the fact that his fame from Jersey Shore is what has provided the opportunity to go large as a DJ and that he’s grateful to be able to bring his long time friends along for the ride. I like a little humble pie with my guido stuffing.

What say you? Do you plan on tuning in to The Pauly D Project premiere set for March 29th at 10:30 EST?