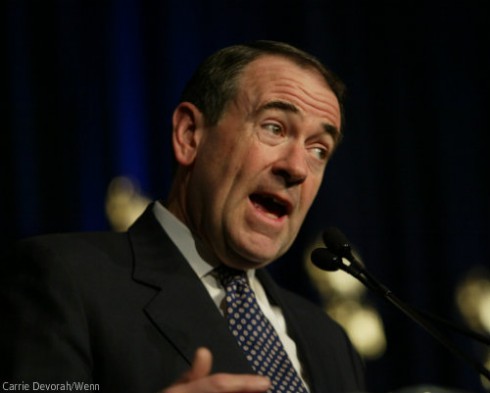 Echoing friend Michelle Duggar’s sentiment that transgender people are creative perverts, presidential candidate Mike Huckabee suggested the only reason people assume other gender identities is to take advantage of unsuspecting men or women. Then he said he is the type of guy who would have done that.

For those who do not think that we are under threat, simply recognize that the fact that we are now in city after city watching ordinances say that your seven-year-old daughter, if she goes into the restroom cannot be offended and you can’t be offended if she’s greeted there by a 42-year-old man who feels more like a woman than he does a man.

The video of his speech was uploaded to YouTube last week and was first publicized by Buzzfeed today. He added he doesn’t believe biological males can really feel “like a woman.”

Huckabee said he is firm in his opinion because he totally would have pretended to be transgender in high school for the opportunity to stare at girls in the locker rooms.

“Now I wish that someone told me that when I was in high school that I could have felt like a woman when it came time to take showers in PE,” he said. “I’m pretty sure that I would have found my feminine side and said, ‘Coach, I think I’d rather shower with the girls today.’ You’re laughing because it sounds so ridiculous doesn’t it?”

Huckabee recently announced his plans to run for president in 2016. Besides these comments, he last made widespread news for supporting Josh Duggar.