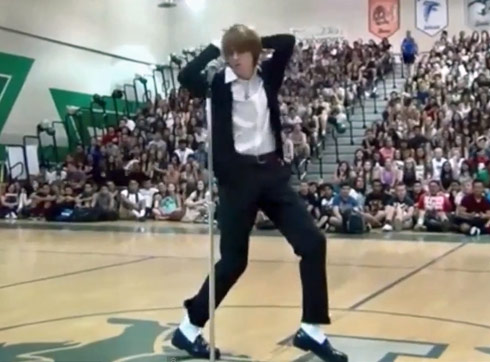 Who needs a hologram!?!

The California kid went full-blown King of Pop as he pretty darn near flawlessly emulated Michael Jackson’s eternal feet of fancy for a blazing performance of “Billie Jean.”

Nichols has never had any formal training but he revealed how he came across this particularly amazing set of ninja skills to Yahoo:

“It started in 2001, at a very young age, when Michael reunited with his brothers. Someone in my house was flipping through the channels, [and] the way he moves really caught my eye. Over the years, through YouTube, I spent months just watching it again and again… I studied each part [and] taught myself.”

She was more like a beauty queen from a movie scene…

As for pursuing a career in dance after his sudden internet fame? Brett says not so much, “Dancing is a positive hobby that I pour my energy into but I’m really into filmmaking.”