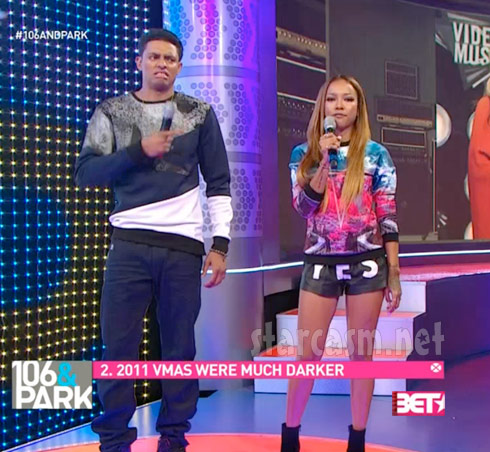 Blue Ivy Carter stole the show at the 2014 MTV Video Music Awards as she danced along in her daddy’s arms to her mom’s EPIC 15-minute-plus performance. The BET show 106 & Park got swept up in Blue Ivy Fever as hosts Brandon Broady and Karrueche Tran shared the “Top Six Things Blue Ivy Thought At The VMAs,” one of which is getting Karrueche into a bit of hot water.

Chris Brown’s on-again, off-again girlfriend said jokingly, “Number 3…I really did wake up like this…because my parents never comb my hair.” She immediately added, “Sorry Blue! I love you!”

It was clear that Karrueche was a bit reluctant and merely reading off a teleprompter during the bit, and she confirmed as much on Twitter earlier today:

Now y'all know I LOVE me some Beyoncé and Blue Ivy! I didn't write this script y'all lol

I am definitely team #BeyHive ❤️

BET has yet to respond to the controversial remark.

Last night on 106 & Park there was a stupid, unthoughtful joke made about a young child. We apologize publically to the child’s parents (and have done so privately) and we have taken punitive actions with those responsible. It was very bad judgment and we will serve you much better in the future. Oh, and please don’t hate on Karrueche; it was NOT her fault. We also apologize to her for putting her in that position.

Beyonce is pregnant! Shows off baby bump in orange dress at VMAs