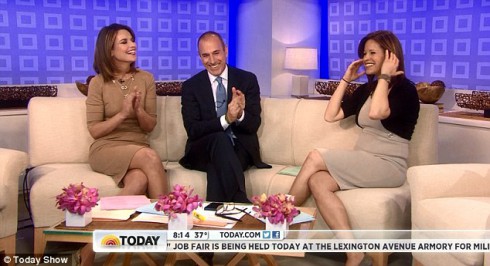 Today weekend anchor Jenna Wolfe joined the weekday cast this morning for a big announcement: She is expecting a baby girl with her partner, NBC reporter Stephanie Gosk. The happy news came as a surprise to viewers who were unaware the women are in a relationship.

“This is the most exciting thing that has ever happened to us,” Wolfe said during a new interview with People. “But I don’t want to bring my daughter into a world where I’m not comfortable telling everyone who I am and who her mother is.”

Wolfe and London-based Gosk have been dating for three years, the majority of which was a long-distance relationship. After moving in together in New York last fall, they decided to start trying for a baby and agreed that Wolfe would carry the child. Using an anonymous sperm donor, Wolfe got pregnant in December and is due in late August. 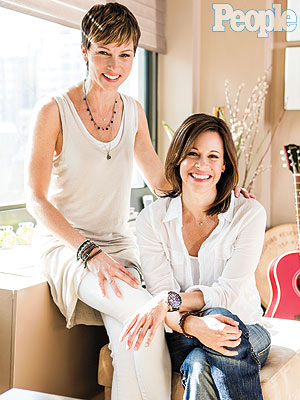 “For a long time I had feared I would never have a child,” Gosk told People. “Now I can think of nothing greater than having my daughter get Jenna’s spirit and energy.”

Wolfe said she also plans to blog throughout her pregnancy. In today’s first installment, she described the whole experience as “surreal.”

From a viewing perspective, one of the exciting things about Wolfe and Gosk’s announcement was how discussion about their sexuality takes a total backseat. In that way, they join the growing trend of celebrities who casually come out. Unlike when Ellen DeGeneres came out of the closet 16 years ago and the news made the cover of Time and was discussed on Oprah, revelations from today’s celebrities are much more blink-and-you’ll-miss-it in style.

Big Bang Theory star Jim Parsons, the author noted Parsons is gay in has been in a relationship for 10 years. A few months later, Anderson Cooper joined the trend by announcing he is gay.

“Always have been, always will be, and I couldn’t be any more happy, comfortable with myself, and proud,” Cooper wrote in an email he allowed Andrew Sullivan to publish.

More recently, Jodie Foster buried the news in a Lifetime Achievement Award speech at the Golden Globes, which was praised by many as brilliant, amazing and inspirational.

In what may or may not be a coincidence, the announcement from Wolfe and Gosk — who are planning to marry — aligns with the Supreme Court hearing on the constitutionality of a same-sex marriage ban.

Either way, it’s awesome that Wolfe, Gosk and their child are able to live in such a supportive world. Congrats!