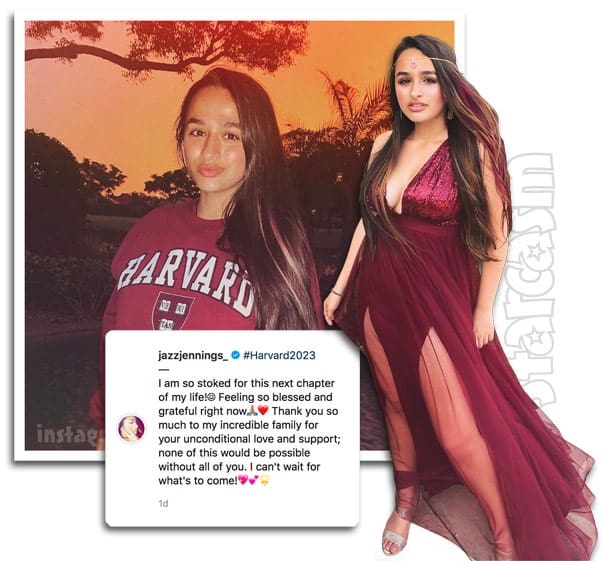 I Am Jazz star Jazz Jennings revealed last month that she had been accepted to both Harvard University and Pomona College, but she had yet to make up her mind where she (and TLC cameras) would be heading in the fall. After a month thinking it over, the 18-year-old reality star has officially announced that she will be headed to Cambridge, Massachusetts to become a full-time Harvard student!

Jazz made the announcement in a video shared by TLC (included below). “Hey everyone, it’s Jazz,” she begins the clip. “I have some very exciting news for all of you! As some of you may know, I’ve been in the process of deciding between colleges, and I’ve made my ultimate decision. Are you ready? Here we go.”

“I am going to Harvard! I cannot believe it! When I found out I got accepted to Harvard, I wast just so shocked — not because I didn’t think I could do it, but just because it’s such a selective school with such a small acceptance rate. I was like ‘Who gets into Harvard?’ But I got in!”

Jazz continues: “I feel so grateful to have this opportunity to attend an institution that’s so incredible and well-renowned.”

The reality star says that she plans to “be me, do me, and have a great time” as a college student. She adds that the thing she is most looking forward to is “meeting new people, making connections, and building friendships that will last a lifetime.”

As far as what she plans to study at Harvard, Jazz reveals: “I’m hoping to major in Philosophy, Gender, and Religion.” But, she says her plans are certainly flexible and she will “figure it out as I go along.”

“I really feel like Harvard is going to allow me to grow to the level that I want to grow to,” she adds excitedly.

Jazz then thanks her fans and supporters as she expresses appreciation to all those who continue to follow her life online and on the show. And speaking of the show, she says that fans will be able to see what went into her college decision on I Am Jazz Season 6.

In addition tot he video announcement, Jazz also shared an Instagram photo wearing a Harvard sweatshirt and captioned it with:

#Harvard2023
—
I am so stoked for this next chapter of my life!☺️ Feeling so blessed and grateful right now??❤️ Thank you so much to my incredible family for your unconditional love and support; none of this would be possible without all of you. I can’t wait for what’s to come!???

Jazz’s brother Sander responded in the comments by writing: “I am the most proud brother on the planet. You continue to amaze me ❤️” Jazz then replied: “You were a huge part of my experience to getting here. I love you??”

And Jazz wasn’t the only Jennings sibling with higher education news. Jazz and Sander’s older sister Arishay was recently accepted into graduate school! “Congratulations to Ari for getting into Graduate School!” Sander wrote in a caption to a photo of him and his sister posted on May 3. “As the oldest sibling you continue to serve as an amazing role model and set the bar high for all of us. So proud of you ?❤️”

Congratulations to all the Jennings! As I stated back when Jazz first announced she had been accepted to Harvard, I am really excited to see the life of a Harvard student — a transgender teen Harvard student at that — documented on reality television!

Perhaps as a tease for her upcoming announcement, Jazz donned an AMAZING Harvard crimson dress to attend prom recently! Check out the stunning photos and videos:

i decided today i wanted to go to prom and now im going to prom✌?