So why is Heather Morris wearing a revealing leotard and moving in ways not allowed in numerous countries? She’s hosting “50 Songs Every Man Should Listen To” in the May, 2011 Esquire music issue and felt she needed to show she’s got the appropriate resume for telling us dudes what we need to be hearing. (Plus, it completely abolishes any hesitance by overly hetero male readers to read something hosted by someone from that high school musical show on Fox. Success!)

Morris, who scored her role on Glee after being brought in to teach the cast the choreography to Beyonce’s “Single Ladies” video (which she was a back-up dancer on), offers up commentary on the 50 new tracks, but sadly doesn’t perform a dance routine for each. Here’s the list of songs and performers – for Heather’s input as well as some of her likes and dislikes when it comes to guys, pick up the new music issue of Esquire magazine on newsstands now! (Or will be shortly anyway) Also, their website has streaming versions of most every song as well! 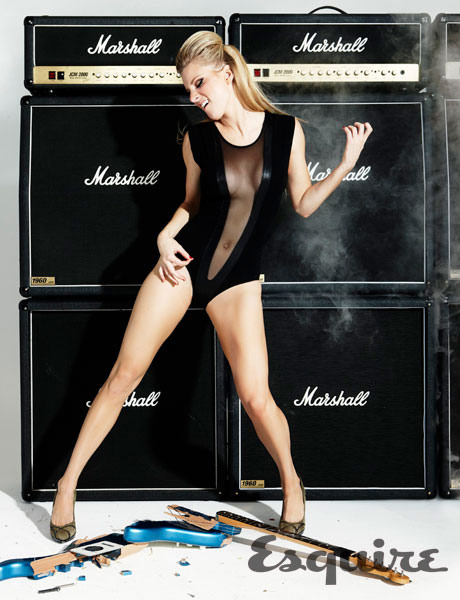 “Who Have You Been Loving,” Bobby Long, A Winter Tale

“You’re Lionel Richie,” Mogwai, Hardcore Will Never Die, But You Will

“You Smoke Too Much,” Old 97’s, The Grand Theatre Volume One

“You Don’t Own the Road,” The Kills, Blood Pressures

“The World (Is Going Up in Flames),” Charles Bradley, No Time for Dreaming

“Baby’s Got a Blue Flame,” Bosco Delrey, Everybody Wah

“Rabbit Will Run,” Iron and Wine, Kiss Each Other Clean

“Cross the Fader,” Jamaica, No Problem

“Wake and Be Fine,” Okkervil River, I Am Very Far

“Famous Last Words,” Mick Harvey, Sketches from the Book of the Dead

“January Hymn,” The Decemberists, The King Is Dead

“Will Do,” TV on the Radio, Nine Types of Lights

“Under Cover of Darkness,” The Strokes, Angles

“One Way Out,” Dhani Harrison

Courtney Stodden debuts song ‘For You’ as Ember, her red-headed alter-ego – EP coming this summer