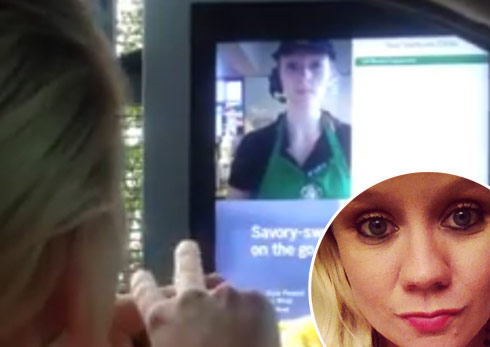 A video posted to Facebook of a deaf woman’s sign language conversation with a Starbucks barista has gone viral.

28-year-old Rebecca King was beyond surprised when she pulled up to an area Starbucks drive-thru in St. Augustine, Florida and was able to order via sign language. This exchange between King and the barista, 22-year-old Katie Wyble, was able to happen thanks in part to a new digital video screen set up at the location (it looks like the staff can see who’s ordering via a digital camera, when they noticed it was Rebecca, a regular, Katie served her so they could use sign language).

Wyble, who is a communications major at the University of North Florida, told WTLV that she started studying American Sign Language since she was in grade school and continued with it through college. King is a regular customer at the store, so when Wyble saw her on the video monitor, she went right to using sign language.

Wyble added, “I’m glad that there’s more awareness for deaf culture and the deaf community. To see this come to light and actually be a part of it, I feel so blessed.”