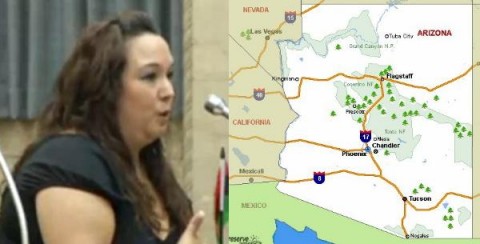 Peggy White is a County Supervisor from Milwaukee, Wisconsin and she has an important lesson to teach anyone who has a public platform and wishes to share their feelings about the volatile Arizona Immigration laws.  This extremely important lesson is; HAVE SOME CLUE IN REGARDS TO WHAT YOU’RE TALKING ABOUT.

In the following clip poor Peggy is defending her argument to refuse Arizona business because of the state’s controversial new immigration law, Support Our Law Enforcement and Safe Neighborhoods Act (SB1070).  As she pleads her case she explains to those in attendance that Texas borders Mexico but Arizona does not.  Uh-oh Pretty Peggy-O:

“If this were Texas, a state that borders Mexico I would have to look twice at this, but it’s Arizona, a state that is removed from the border.”

According to Tucson Citizen her Facebook page had Mexican history as one of her interests but she has since removed that listing.  White went on a TV station afterwards and said she misspoke.

“But having it be Arizona, having it be the second largest border and knowing there are troops on the border in Arizona, it didn’t seem to me that this legislation was particularly necessary at this moment in time.”

The Board took no action on the measure but Arizona Senator Jon Kyl did by sending Peggy a letter, and a map (ouch).  There is no word yet on if her investments in oceanfront property in Arizona have taken a hit because of this very public flub.