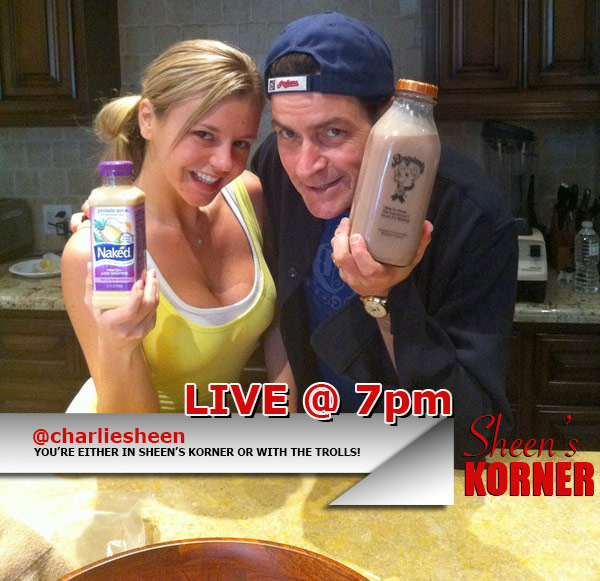 Charlie Sheen kicked off his new web series titled Sheen’s Korner tonight on UStream. The 45-minute show was filmed live from his Sherman Oaks, California home and featured Charlie along with a few of his posse, including Goddess Natalie Kenly, Simon “Dirty Nasty” Rex and two dudes known only as Jason and Matt.

Sheen’s Korner consisted of a number of scripted comedy bits and Charlie making light of his two-week media insane-a-thon by continually uttering his catch phrases “Winning!” “Losers!” and “Duh!” The show was disappointingly stilted with an awkward Charlie Sheen who flirted at times with the exuberant and crazy greatness from his first two infamous interviews last week, but rarely drifted into anything I would consider entertaining.

One of those few moments came at the end of the broadcast when Charlie recited the poem “The Big White Phone” (which is a toilet BTW) from his obscure book of poetry titled A Peace of My Mind. Here’s a clip of the reading followed by the poem and Charlie’s introduction in text form.

“It’s called ‘The Big White Phone.’ It’s just about everything just kind of melting down around you. Imagine that.”

When the age of confusion appears in disarray
“It’s an act of illusion,” dead babies would say
When the clock’s final ticking exposes your day
It’s your balls we’ll be clipping in the dock of your bay

VIDEO Lady Gaga and Madonna on SNL wrestling in lingerie!