Resnick made headlines when her friend Nicole Brown Simpson was murdered in 1994. She testified against O.J., claiming that he told her that he was going to kill Nicole. She later wrote several books about her experience with the O.J. trial.

Resnick posed nude for Playboy for the March 1995 issue, something Camille Grammer took a moral issue with on tonight’s episode (even though Camille has appeared in Playboy 15 times, she takes issue with the fact that Resnick used her friend’s death to gain fame.)

Resnick attended a dinner party with the Real Housewives of Beverly Hills as a guest of Kyle Richards, who describes Resnick as “like a sister.” She’s currently a Hollywood interior designer, and on her websites her clients are listed as Kyle and Maurico Umansky, Paris Hilton, Nicky Hilton, Nick Lachay, and Kevin Connolly. 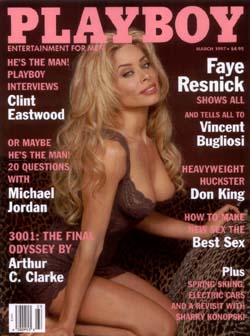 The other dinner guest, Allison Dubois.