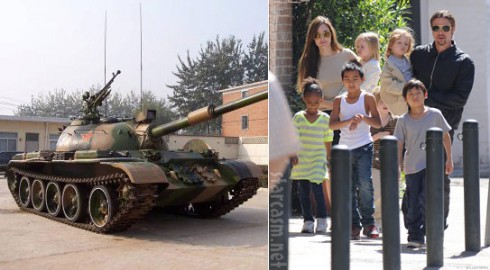 When asked by Australian TV Show 60 Minutes actor Brad Pitt stated that he planned on acting for 3 more years. He said:

“Three years. I am really enjoying the producing side and development of stories and putting those pieces together…Getting stories to the plate that might have had a tougher times otherwise.”

Moans were heard across the globe from despairing lady fans at the thought of Pitt no longer enhancing their local theater screens so he clarified those statements. At a press conference in South Korea, dude gets around, he extrapolated upon his previous comment:

“I wasn’t actually putting an exact deadline on my expiration date, but I see it coming. I just have other interests and I do quite enjoy the production side.”

We know that part of Brad’s interests lie with his 6 children that he shares with Angelina Jolie. While on the set of the recently shot film World War Z, Brangelina’s kids enjoyed some quality play time in a Russian Army T-54 tank so Brad Pitt did what Brad Pitt does. The man bought the sucker and is having it shipped to Los Angeles as a permanent play thing for his brood!

As if things aren’t rough enough being a dad to another kid where Pitt’s kids get their schooling now they have to face this at show and tell. Can’t you just see little Bobby showing off his new bicycle helmet when Maddox rolls up in a freaking tank? Keeping up withe Jones’ is one thing, Keeping Up With the Kardashians is a TV show but keeping up with Brad Pitt and Angelina Jolie, well that’s just impossible!