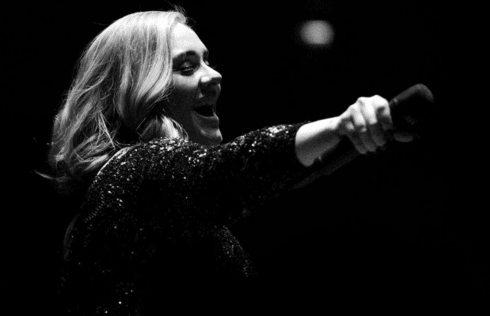 Just because you’re a Grammy award-winning songstress with millions of adoring fans and hit after hit on the Billboard charts, doesn’t mean you’re immune to a flub every once in a while.

While performing a concert in Lisbon, Portugal, Adele was in the middle of belting out the song “A Million Years Ago” from her album “25” when she suddenly forgot the words. Rather than try to cover her mistake or mumble through it, Adele did what most people would when they make a big mistake: she swore.

“S**t, wrong words,” she admitted. “S**t, s**t, s**t. I started singing the verse instead of the chorus. Sorry!” she continued while busting out in laughter.

The crowd didn’t seem to mind and laughed right along with her.

Adele forgot the lyrics to her song and this was her reaction. ? pic.twitter.com/n1EyHwXM56

But this is certainly not the first time she’s messed up during a concert. A YouTuber posted another video Adele in concert in which she messes up the lyrics for “Rolling in the Deep”. Check it out at the :55 second mark below.

This just proves Adele is human and gives up one more reason to love her!