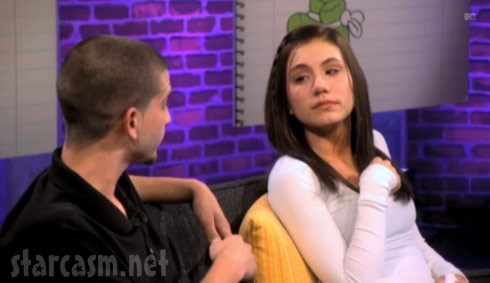 Tomorrow night is the 16 and Pregnant Season 3 Reunion Special during which Dr. Drew sits down with all of the girls from this season (and most of their baby daddies) and discusses what happened on their episodes and since. MTV has posted a brief preview clip featuring Jamie McKay and her infamous baby daddy Ryan, who not only showed up late to their daughter Miah’s birth, but appeared to be hung over and sporting a hickey!

Here’s the preview in which a tearful Jamie struggles to listen to more of Ryan’s excuses about that night:

In case you missed Jamie’s episode, Ryan had lost his driver’s license and was skipping out on attending Jamie’s doctor’s appointments with her just prior to Jamie going into labor, at which point no seemed to be able to reach Ryan on the phone.

He eventually showed up after Jamie had already been in labor for five hours and appeared to be hungover. Here’s their dialogue that begins with Ryan’s explanation for why he was late:

Ryan: The past three nights I’ve been staying up. I haven’t been able to sleep waiting for your phone call. And the one night I knock out you go into labor.

Ryan: Why is that? [with a nervous look to the camera]

Jamie: I don’t think I need to say that right now.

When Jamie later returned to school after giving birth to daughter Miah she found out that Ryan had allegedly been seeing another girl for months (dating back to before she gave birth) and most everyone in school knew about it. 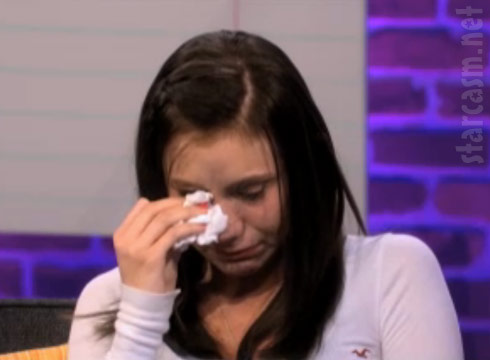 Perhaps these shows are edited in a way that favors the moms, but I just can’t seem to give Ryan any sort of benefit of the doubt here. He reminds me a lot of Adam Lind, Chelsea Houska’s baby daddy from Teen Mom 2, minus Adam’s occasional outright viciousness like that text message in which he referred to his daughter Aubree as “that mistake.” So it seems to me that Jamie needs to prepare to move on – which she is apparently doing!

CLICK HERE to read up on Jamie’s bid to gain sole custody of Miah based partly on Ryan’s “history of cocaine abuse.” Plus, CLICK HERE to read some of Jamie’s less than flattering remarks about Ryan that seem to suggest MTV may have somehow made look good comparatively speaking! For example:

No Ryan and I aren’t together. There is A LOT they don’t tell you about Ryan like he got more than one dui went to jail twice and got possession of paraphinalia and coccain. All while I was pregnant. I couldn’t trust him with her this is BS. I also let Ryan stay the 3 nights I was in the hospital and he didn’t help me but once.

Either way, Jamie’s story is a compelling one and I think she would make a great choice for MTV’s Teen Mom 3. Do you agree? Then take our Teen Mom 3 poll!