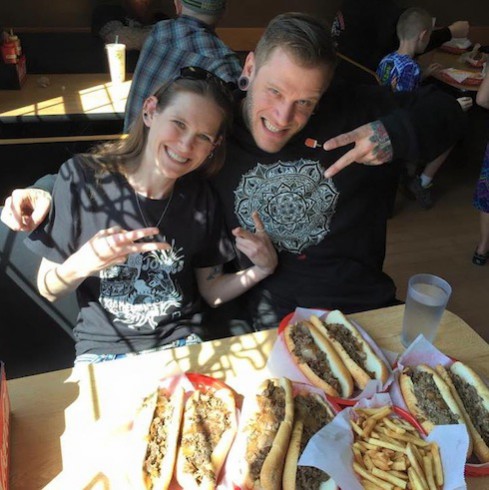 Molly Schuyler is a 120-pound mother of four. She is also a pro on the competitive eating circuit–one of her most notable feats was finishing a 72-ounce steak dinner at Amarillo’s Big Texan Steak Ranch in four minutes and fifty-eight seconds last May. That was the record for a single dinner, until very recently.

Schuyler also ate two (2) of the steak dinners–complete with bread and side dishes–in under fifteen minutes last year, which was the world record for two (2) dinners. Just in case your mind is too boggled to realize: That is approximately ten ounces of steak every minute for fifteen consecutive minutes. Plus bread and sides.

Well, this weekend, M-Schu was back at it, and she decided to inspire and disgust us all. Schuyler took on four teams of two people each–that’s eight people–at the Big Texan, and topped her own accomplishments by downing three (3) complete 72-ounce steak dinners in under twenty minutes.

According to the Amarillo Globe-News, the total weight of each dinner is around five (5) pounds. Which is an absurd amount of food to eat all by itself. So Schuyler gained fifteen pounds in twenty minutes of ferocious chewing. And 216 ounces of that–or 13.5 pounds–was meat. Heavy, greasy, delicious, sleep-inducing meat.

And here is perhaps the most absurd thing about all of this: Schuyler actually took two bites of a fourth steak before putting down her knife and fork. Not because she was full–because she was sick of eating so much of the same thing.

She plans on returning to complete four dinners. “Four is totally doable,” Schuyler said, “but five is almost unattainable.” Because, naturally, one assumes that after finishing 288 ounces of meat, 72 more is the correct thing.

In case you’re curious, the Big Texan dinner is on the menu down Amarillo way. If you can finish it in under an hour, it’s free. Otherwise, it costs $72.

Here’s the video of Schuyler’s awe-inspiring, nauseating feat, if you’ve got the stomach for it:

No word on noted carnivore Ron Swanson’s reaction to the accomplishment.

Shailene Woodley makes own her medicine, cheese, and toothpaste, forages food, and collects spring water from a mountain