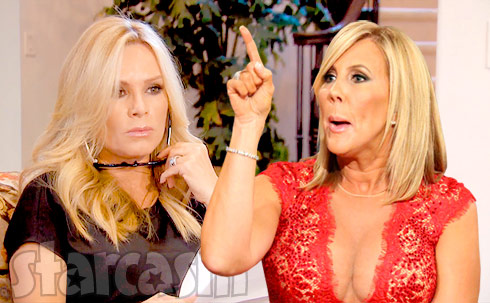 The Real Housewives of Orange County drama surrounding the validity of Vicki Gunvalson shady beau Brooks Ayers’ cancer diagnosis continues to rage on! In the latest development, Vicki took to her Bravo blog to very carefully defend/not defend Brooks’ cancer claim before then openly questioning whether or not her on-screen frienemesis Tamra Judge lied about having cervical cancer!

As I mentioned, Vicki very carefully came to Brooks’ defense, but she did so in a way that strategically leaves the door open for the possibility that he could have been faking his cancer diagnosis:

The constant subject line of Brooks’ cancer, his choice of treatment, and if he was “faking” it or not has gotten out of control. My stance is I do not believe he faked cancer, as there are way too many people involved, way too many doctor visits and way too many doctor reports which would be very difficult to falsify. As I said at the reunion, I didn’t have enough information that he does have cancer, and I didn’t have enough information that he doesn’t. Brooks became very private with his health information the last few months of our relationship, which made it difficult for me to discuss this with him.

Ever since the reunion taping, during which there was reportedly proof shown that Brooks was lying about having cancer, Vicki has seemed to carefully craft all of her comments (like a politician) with a lot of “as far as I know” and “it’s not impossible” kind of talk. She later iterated how busy she was and how that kept her from being an eye witness to much:

Due to my busy schedule of filming, running my insurance business, and going to OKC to see my daughter a lot, I wasn’t around for many of his doctor visits. Brooks understood my schedule and had many people around him who were there for him when I couldn’t be.

After addressing Shannon Beador’s anger over Vicki talking about her husband David’s affair at Tamra’s baptism, Vicki set her sights on Tamra. Vicki reveals she is angry that Brooks’ cancer diagnosis was ever questioned to begin with, and asks, “Who questions someone’s private health and their treatment plan? Is this normal behavior by grown adults?”

Then Vicki brings up the time Tamra revealed on Dr. Oz that part of her motivation for having her breast implants removed was because of a cancer scare. “I go to the doctor and I have lumps in my breasts and I had cervical cancer that had to be removed,” she told Dr. Oz.

Vicki openly wonders why no one questioned Tamra’s claims. “Just interesting we haven’t heard anything about it since then,” she concludes. From Vicki:

It was the first time any of us had heard [Tamra] was diagnosed with cervical cancer and we were all in shock that she had never talked about it prior to that. No one at that time ever asked her for her medical records, and since then we haven’t heard anything about it after that does that mean she was faking it for attention?? I mean if you are diagnosed with cervical cancer isn’t that pretty serious? I also pulled up this article that said Tamra wanted her breast implants removed to “taking back control of her body” to now only a few years later put the implants back in. So…should we ask Tamra for her medical records to see if in fact she really had cervical cancer and lumps in her breasts? No! That would not be normal behavior and we trust that Tamra told us the truth. Just interesting we haven’t heard anything about it since then.

I’m sure our commenters will quickly point out why Brooks was treated a bit differently than Tamra in these instances, but let me say that, for whatever reason, Brooks sets off a lot of people’s shady detectors, including mine. Perhaps it’s unfair, but he sure seems to have quite the shady track record to back up those vibes. (Oh, and by the way, Vicki is apparently completely shady blind where Brooks is concerned.)

Annnnnnyways, the clock is currently ticking on Tamra’s response to Vicki’s comments, so stay tuned!

PHOTOS from The Real Housewives of Orange County Season 9 Reunion