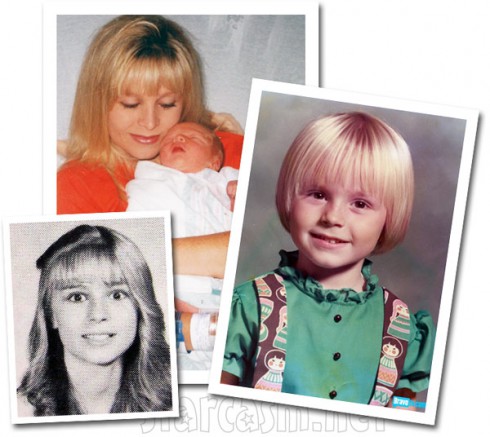 Miss Tamra Barney (now Mrs. Tamra Judge — but more on that later) joined The Real Housewives of Orange County during the show’s third season, which premiered on November 6, 2007. So that means television viewers (and blog readers) around the world have been following Tamra’s life for almost six years now, which is an extremely long time in the relatively new world of reality TV! Tonight Tamra steps out of the dramatic and ever-changing (except for Vicki!) ensemble cast and into the spotlight as she (and now husband Eddie Judge) stars in her own spin-off mini-series, Tamra’s OC Wedding, premiering at 8/7c on Bravo.

In honor of the Tamra’s OC Wedding premiere as well as the fact that today is Tamra’s 46th birthday, I thought I might take a look back — waaaaaay back, to the time before Tamra became the wonderfully polarizing no-holds-barred Bravolebrity we’ve come to know and love (and despise for some, though not me!) on The Real Housewives of Orange County. So, without further hesitation, I present to you the… 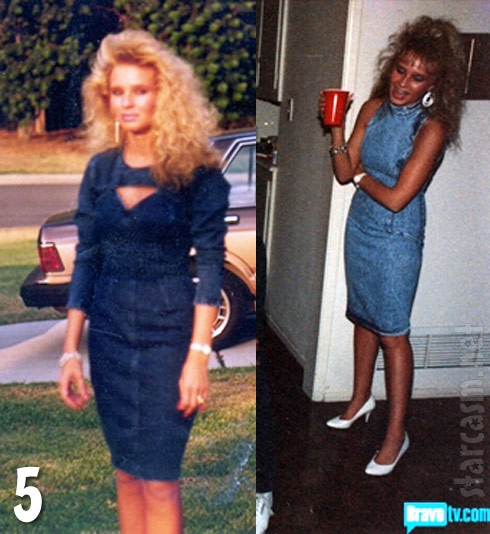 Perhaps I’m revealing my age, but there’s something about big hair, a denim dress, and a Solo cup that makes me think I’m about to get lucky — and with these photos I feel like I already have! (And a little self-pat on the back for making Tamra appear to admire her own denim-clad Tamradonkadonk!) 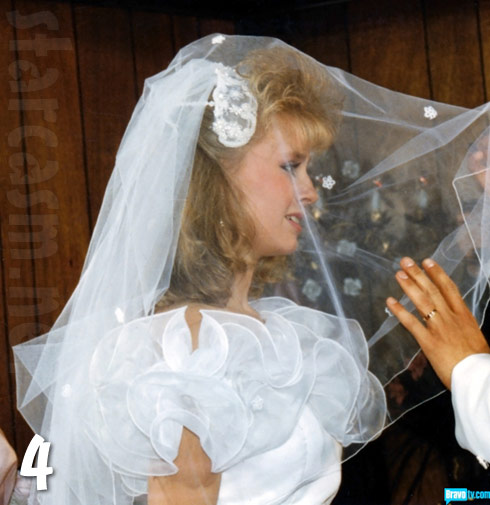 Here’s a photo from Tamra’s first wedding to Darren Vieth. Although I’m sure this is a day (and a human being) Tamra would like to forget sometimes, that doesn’t mean she didn’t look lovely with her ruffles and matching hair-sprayed poufy bangs! (There’s nothing that screams “Throwback wedding photo!” quite like a backdrop of wood paneling, am I right?) 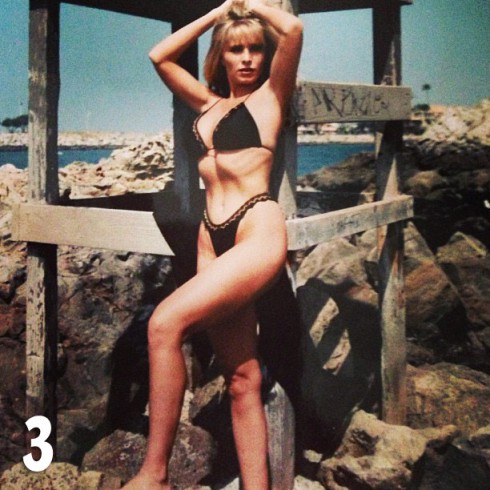 When Tamra posted the above photo to instagram for Throwback Thursday a couple of weeks ago she wrote an accompanying caption that was way better than I could ever do — although I would replace the word “worse” with “awesomer:”

Going through old pictures and found this….25 years old and YES that was a G-String! Lmao I don’t know what’s worse.. The bathing suit , the pose or that constipated look on my face. #ImSexyAndIKnowIt

The bikini (at least the top half) must have been a favorite of Tamra’s for a period back in the late 1980s because she’s sporting it again in this retro bikini lounging picture shared by Bravo: 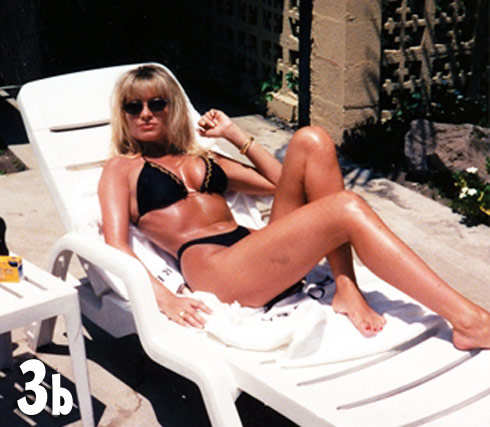 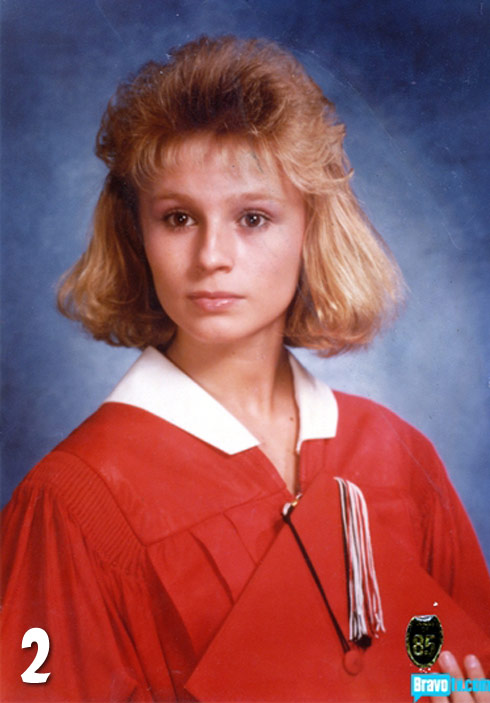 All the rest of the photos in this post bring a huge smile to my face, but I have to be honest about this high school graduation photo of Tamra — it scares the sh!t out of me! In stark contrast to the feeling of imminent luck inspired by her denim dress, big hair and Solo cup above, young Tamra’s steely brown eyes and ferocious bangs ‘n’ bob hairdo tell me my day, my week, the rest of my life is about to get TORE UP! The photo ranks Number 2 on the list because I think it’s important to know that Tamra had her take-no-sh!t reunion glare from very early on. Of course, it makes sense that she would need to develop that early on given that her name was Tamra Waddle!

Here’s another, slightly less intense photo of Tamra Waddle as a senior in high school from her yearbook: 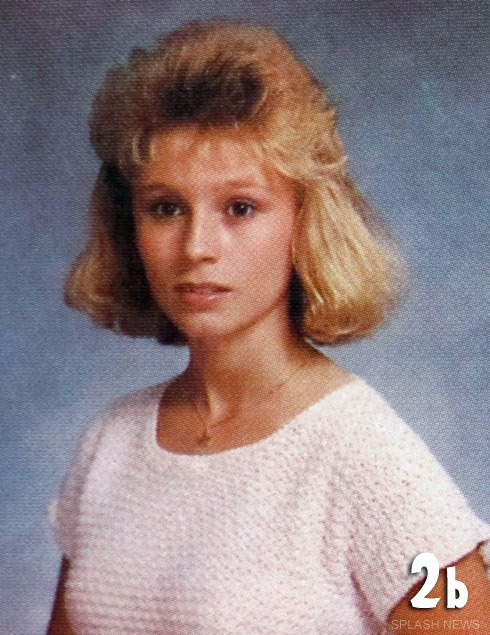 1. TAMKINI MARTINI ON THE ROCKS 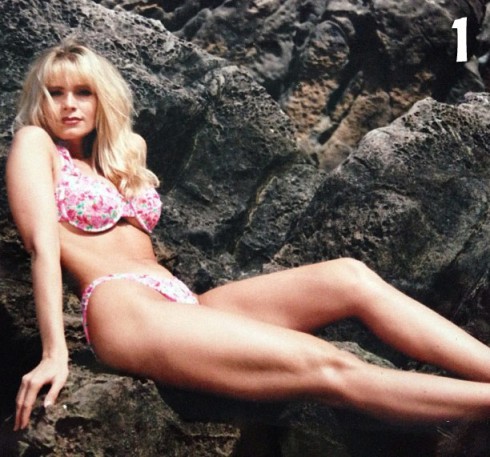 This is the young man’s version of unicorns and rainbows right here! It’s the kind of image a man would want to paint on the side of his airplane before heading off to a battle he’s probably not come back from. A fashion professional might lament the fact that Tamra should have gotten a bikini top a couple of cup sizes larger, but in a guy’s mind, it just looks like barely containable awesomeness. I think Tamra pretty much agrees judging from her instagram caption for the photo:

And speaking of Cut Fitness, Tamra and Eddie’s new gym is helping her maintain her bikini-friendly figure 25 years later: 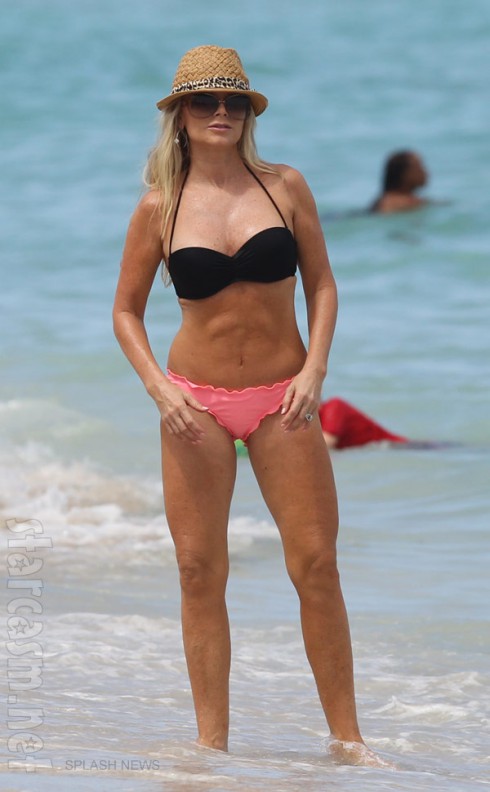 UPDATE – It seems Tamra has the self-confidence to agree that she’s still looking just as damn fine as ever! Actually, in a new interview with Life & Style she suggests she looks even better! “Overall, I feel more comfortable in my skin now,” Tamra revreals. “I look hotter at 46 than I did at 25!” And here’s a tweet from Tamra that has more than a thousand words that make her argument quite eloquently:

Be sure to tune in to Tamra’s OC Wedding every Monday night for the next three weeks at 8/7c on Bravo where she will be creating the throwback photos I will be writing about in 2038!