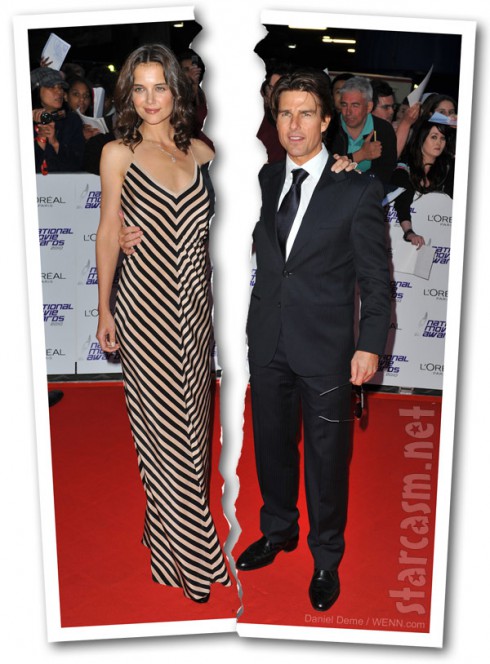 One of the biggest megacouples in Hollywood is headed for divorce as it is being reported that Tom Cruise and Katie Holmes are separating after 5 years as husband and wife.

A rep for Katie stated to People:

“This is a personal and private matter for Katie and her family. Katie’s primary concern remains, as it always has been, her daughter’s best interest.”

UPDATE – A rep for Tom Cruise has also issued a brief statement:

“Kate has filed for divorce and Tom is deeply saddened and is concentrating on his three children. Please allow them their privacy.”

According to sources with TMZ the couple do have a prenup and their estimated combined worth is $275 mil. Katie has not attended any of the Rock of Ages premieres and the last time they were seen in public together was in February for the Vanity Fair Oscar Party (see photo above).

Katie converted to Scientology while she was with Tom, no word yet on if she still practices. His 2nd wife Nicole Kidman also practiced Scientology when she was with him, but all signs now point to Nicole no longer being a part of Scientology (though she never openly speaks about it.) Info once leaked that Nicole is now viewed as a “Repressive Person” by the religion (many people feel it is more like a cult.) Did Katie leave Tom to protect Suri from Scientology?

UPDATE – According to the divorce documents, filed anonymously on June 28 in New York, Katie is asking for sole custody of Suri! CLICK HERE to read more!