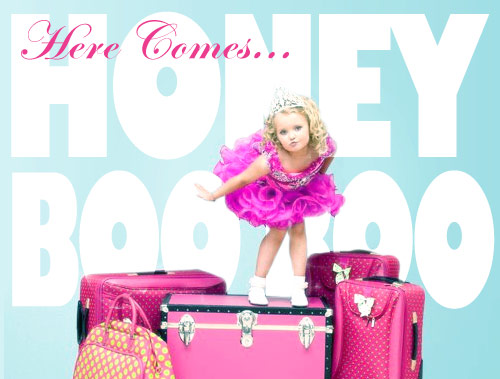 We announced back in early March that the Go-Go-Juice-guzzling star of Toddlers and Tiaras Alana “Honey Boo Boo Child” Thompson might be getting her own spin-off series, and earlier today TLC made it official. The show will be titled Here Comes Honey Boo Boo and it will feature the charismatic catch phrase generating six year old as well as her rather eccentric Southern family that includes Alana’s stay-at-home mom, June “The Coupon Queen” Shannon, chalk-mining dad, Sugar Bear, and sisters Lauryn “Pumpkin,” Jessica “Chubbs,” and Anna “Chickadee.”

According to a statement released to Us Weekly, viewers will get an “an inside look into Alana’s world.” Alana “proves that she is more than just a Go-Go Juice-drinking beauty queen,” the statement continues. “When she’s not chasing after crowns, Alana’s with her family in rural Georgia doing what her family does best: four-wheeling through mud pits and picking up road kill for the family cookout.”

Wait, what? “A dolla make me eat roadkill” I guess.

Alana’s spin-off comes on the heels of her Toddlers and Tiaras compatriot Eden Wood getting her own show on Logo. Titled Eden’s World, it premiered in April of this year.

The premiere season will feature six half-hour episodes. No word on the premiere date yet.

Let’s celebrate this special announcement with lots of Honey Boo Boo Child animated gifs, shall we?

Honey Boo Boo family updates: Currently filming? “will b back with some big things soon”