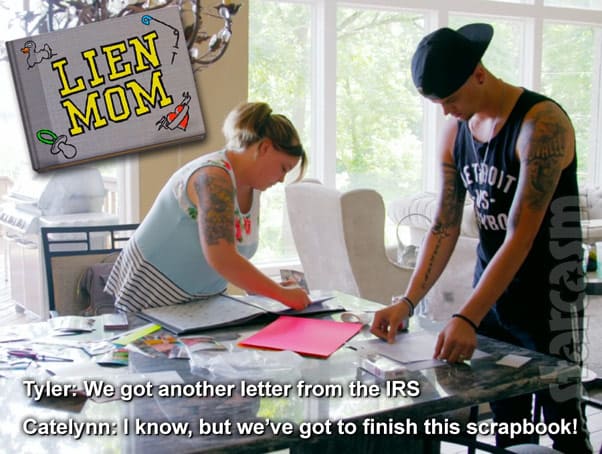 According to tax records, Catelynn and Tyler got slapped with the tax liens in November and December of 2019.

A clerk for the Michigan court confirmed to The Sun that both liens remain unpaid.

The total lien amount is sure to be an eye-popping figure for most people (myself included), and is a clear indication that the Baltierras are making A LOT of money from MTV.

I’m no accountant, but a quick search reveals that the average tax paid by Americans making between $500,00 and a million dollars a year is 22.6%. Between $200k and $500k pay 15.2%. I realize there are a lot of factors (exemptions, social security, Tierra Reign losses, rehab expenses, horse maintenance, etc.) that probably aren’t included in that very basic formula, but I thought it might be fun to use it to guesstimate Catelynn and Tyler’s income during those the years.

PLEASE DO NOT spread these numbers all over the internet! They are wildly uneducated guesses based on a very basic tax bracket percentage. The Ashley’s Reality Roundup has teased an upcoming article on the liens, so I am hoping she will have a more accurate assessment of how much the Baltierra’s make from MTV.

UPDATE – The Ashley has since posted her article on Tyler and Catelien, and she simply states they make “way over $300,000” each per Teen Mom OG season from MTV. The Ashley also reveals that the Baltierras’ 15-acre farmhouse has an estimated value of “around $258,000.” Let’s hope for the couple’s sake that some of those 15 acres have jars of cash that they buried!

The HUGE tax liens would certainly seem to explain why Catelynn has been one of the most aggressive Teen Mom stars when it comes to clickbait stories on social media. I cannot count the number of times she has used a sonogram with a vague title suggesting she is pregnant again. And back in February, she posted a photo holding her daughter Nova on Instagram with the caption: “We’re giving Nova away… #linkinbio ??.” (The article was about Nova getting pink hair extensions or something like that.)

Catelynn's account posted this and I just don't know what to say. Not only is it reprehensible as a clickbait tactic, but it basically erodes her and Tyler's entire platform promoting adoption over the years. Wow. #TeenMom #TeenMomOG (Apparently the article was something about Nova getting pink hair extensions? After scrolling through 9 pages of course.)

So far, neither Catelynn nor Tyler have responded to the tax lien story breaking earlier today. My guess is that we will be seeing some posts soon with captions like: “We’re losing it all! #linkinbio ??.”

If you’re curious how a couple manages to not pay taxes for at least three years, it’s important to remember that the cast members of all the Teen Mom shows are paid as freelance contractors, and taxes are not taken out of their paychecks. They get paid in big lump sums at the end of each season, and it is their responsibility to pay the taxes. This has resulted in a few of the other cast members running into tax problems, including Maci McKinney and Leah Messer.

Former Teen Mom 2 star Jenelle Eason tried to explain to everyone how difficult it is to make tons of money and then have to pay taxes. “Everyone thinks our lives are just full of money,” Jenelle wrote when she was still employed back in 2016. “We pay hundreds of thousands in taxes every year, we cannot get government assistance, if we go to school we pay in full and cannot get financial aid, can’t get WIC, food stamps, section 8 (which makes us pay rent in full on top of water and electric), if your credit is bad like mine was then you cannot finance even a car for your family and take more money to buy a car in full.”

Thankfully for Jenelle and David, they don’t have to pay nearly as much in taxes any more.