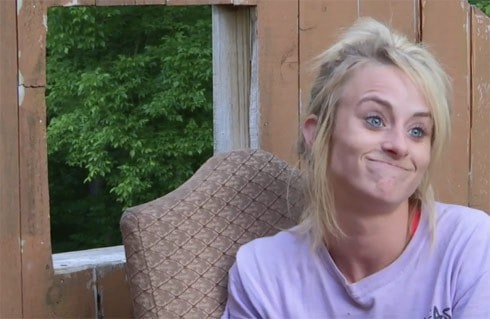 MTV has dropped a couple of previews for the upcoming episode of Teen Mom 2. See Javi’s tense return home, get the latest on Kail’s angst about how her divorce is being portrayed on the show, watch as Leah Messer stresses out when she can’t get a hold of Jeremy Calvert and see an intense belly kicking video from due-any-day-now Chelsea Houska!

It’s awkward turtles  as Javi Marroquin returns home to some super excited kids and a disgruntled wife. Isaac and Lincoln greet Javi with open arms but Kail bluntly refuses his request to borrow car seats for his new truck to take them to camp.

In current Kail news, A report published this morning via Radar is claiming that Lowry is currently on strike from filming the show because of her disapproval of how the producers are handling her divorce story line. During the most recent episode of TM2, Kail is shown ignoring a call from Javi because she doesn’t want to discuss the split on camera. The show then cut immediately to a scene of Javi getting a call and discussing the divorce.

A source close to Lowry said, “She is very hurt and feels betrayed by her producers. Her and Javi at that point already knew they were done and getting a divorce, but did not want to film about it.”

Kailyn has been openly critical of the producers in recent responses to tweets from fans: 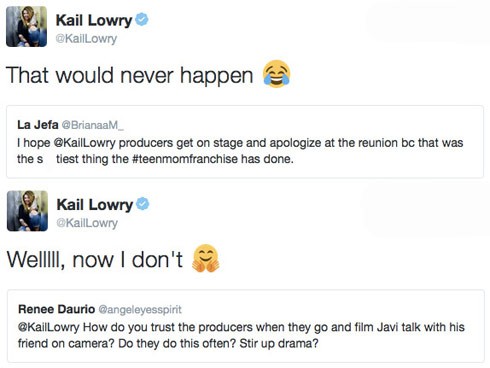 Leah gets stressed out when she can’t get a hold of Jeremy Calvert, who is out of town with their daughter Addie. When Calvert returns the call things get heated and Jeremy ends up hanging up on Leah.

Leah was complimentary of Jeremy earlier this week on Twitter and the timing has the Teen Momiverse doing some serious speculating as Calvert and fiance Brooke Wehr strongly hinted at a split via separate posts on Instagram. 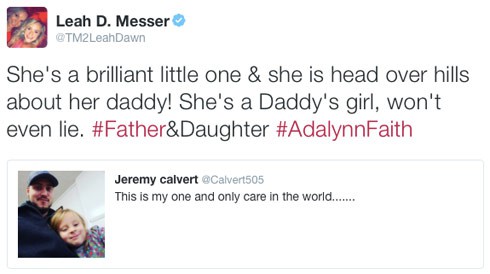 There’s no preview but this Instagram video of Chelsea and Cole’s little fellar doing some womb gymnastics demanded a reshare!

OKAY SO probably weird to some people hahah but I'm obsessed. This dude was going crazy in there last night 😬😬😬 @coledeboer