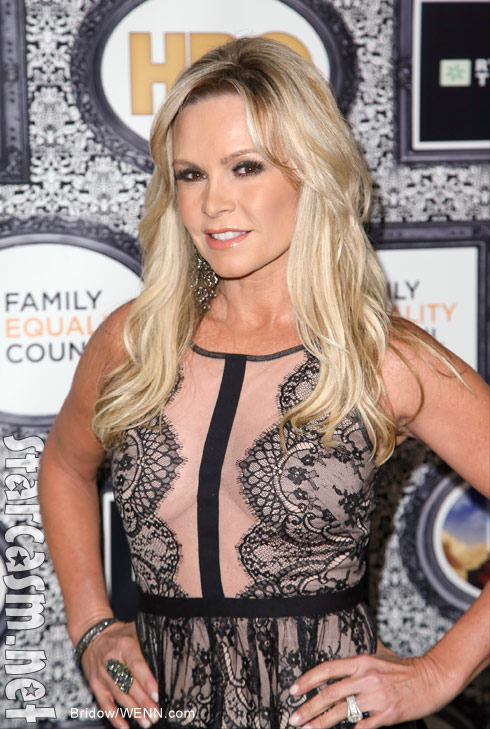 The Real Housewives of Orange County just kicked off its ninth season last week, but for cast member Tamra Judge, there has been more drama off-screen than on thanks to claims made by her ex-husband Simon Barney in court papers made public by Radar Online on Monday, April 14 — the same day as the RHOC Season 9 premiere.

Tamra has since addressed the allegations with comments on Facebook and Twitter but earlier today she posted a lengthy blog entry on BravoTV.com about what it has been like the last couple weeks dealing with this information being made public.

“I would like to start my blog by saying this has been the most devastating week of my family’s life,” Tamra writes, before adding, “To be accused of exaggerated and false allegations is every mother’s/father’s nightmare. I would not wish it on anyone and my heart goes out to all those parents that are dealing with the exact issue. As I always say…DIVORCE DOESN’T HURT KIDS, ANGRY/BITTER PARENTS HURT KIDS.”

Tamra mentions that in a previous blog entry she had stated that she believed that children with divorced parents should have both parents in their lives, and she goes as far as to say, “I have always told the children that it would be great if their dad could live right across the street so they could see us both every day. It’s unfortunate that he doesn’t feel the same way.” 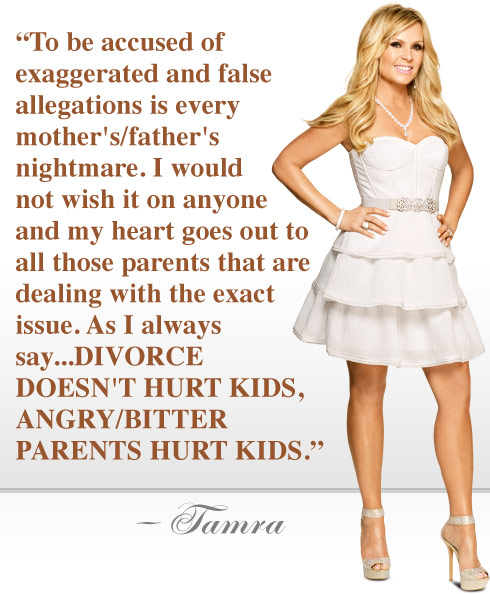 One of the things revealed in the court documents is that Simon and Tamra’s now-15-year-old daughter, Sidney, had opted to not live with her mom but with her dad instead. “What most people didn’t know is that my relationship with my 15-year-old, Sidney, was strained and she decided that she wanted to live with her Dad,” Tamra writes. “This came as a total shock to me! Sure, I knew things were not prefect and we didn’t always see eye-to-eye, but I thought it was her age?”

Tamra then explains that she had similar issues with her mother as a teen and openly wonders if her parents had divorced when she was 15 if she would have chosen to live with her dad as well. “I was in my 20s when my parents divorced and it was extremely hard on me. I chose my mom’s side and didn’t talk to my dad for years. That has now come to bite me in the butt, and I think about the pain I caused my dad all those years.”

Tamra talked at length about her relationship with her daughter Sidney and how they continue to try to make it a better one:

As parents we are NOT perfect and we make mistakes, but family is everything. I had to hide my tears daily to protect Sidney from this getting out and being made public. Fifteen is a very hard age and I knew if this went public it would be SO hard on her. But now that all this info has been released we have to deal with the public pain as well. I have been called some pretty harsh names in the press like “Monster Mom” and my daughter has had to deal with some mean comments on her social media — she decided it was best to shut it down. We continue to work on our relationship with the help of a therapist, and some days things seem good and others, she pulls away.

“Divorce is painful,” Tamra admits, “and parents sometimes put children in the middle which causes kids to pick sides which is devastating to the other parent.”

But Tamra hasn’t been completely without support — quite the contrary. “I have gotten so many messages from people sharing their similar stories and it really has helped me get through some tough hours,” she says. “I want to thank my family, friends, therapist, fans and complete strangers for their support.”

So what now? Tamra reveals she had a bit of an epiphany courtesy of something her dad said to her. “I cried to my dad on Easter and he said some something to me that made me open my eyes and snap out of my depression: ‘It’s time to stop defending yourself and fight for what is important to you.'” A seemingly more positive Tamra then added, “I know this too shall pass and he has no foundation to his allegations, but it still hurts me to see the kids going through this. Thank you to everyone that has reached out to me.”

Tamra and Simon have a hearing date set for this Thursday, April 24.