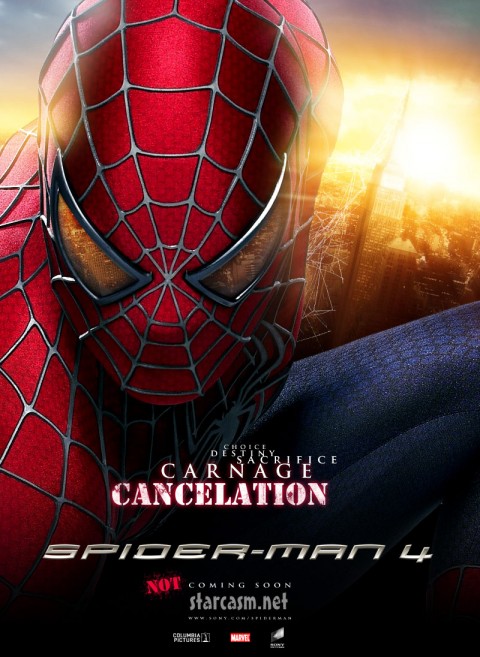 My production FAIL sense is tingling! Deadline.com broke the story earlier today that Sony’s Spider-Man 4 movie, scheduled for a release date of May 5, 2011, has been scrapped and the franchise will receive a “reboot.” That means director Sam Raimi, Spider-Man 1, 2 and 3 Tobey Maguire and the rest of the cast are no longer going to be part of the web-slinger franchise!

Deadline published an email from Sony that went out to the special effects crew that was scheduled to start working on Spider-Man 4 that stated the project was being delayed. Here is the complete email:

We were just notified that our schedule is pushing. We will NOT be starting as planned. I’m terribly sorry for this news, and I hope this email reaches you in time to find other options. We do not know how long we are pushing, and we will not know until mid-January. By mid-January, we will be told how long the push is, whether it be 2 weeks, 2 months, or something else. The studio has every intention of making the movie, but we no longer have a confirmed start date.

Again, I’m terribly sorry, but Sam Raimi has story issues [that] need to be resolved before we are ready to shoot.

Feel free to call me if you have any questions.

Is that how emails affecting multi-million dollar projects begin? “Hey there–?”

Anyway, it appears that the delay and eventual cancellation all stems from director Sam Raimi’s displeasure with the script, which had been worked on by screenwriters Jamie Vanderbilt, David Lindsay-Abaire, and Gary Ross before being passed off to Alvin Sargent, who wrote the previous two installments Spider-Man 2 and 3. Eventually the schedule just got too tight and Raimi told Sony he didn’t think he could make a quality movie in time to make the release date. So, BLAMMO!

The studio is reportedly now eying a summer 2012 release for the reboot, which will more than likely cash in on the recent surge in popularity of 3-D movies, thanks in large part to the HUGE success of James Cameron’s Avatar. (Deadline brings up the point that Cameron worked up a Spider-Man treatment back in 1991 and it was acquired by Sony in a lawsuit, so there are already rumors that Cameron might be brought on board for the new Spider-Man movie.)

Culver City, CA (January 11, 2010) — Peter Parker is going back to high school when the next Spider-Man hits theaters in the summer of 2012. Columbia Pictures and Marvel Studios announced today they are moving forward with a film based on a script by James Vanderbilt that focuses on a teenager grappling with both contemporary human problems and amazing super-human crises.

The new chapter in the Spider-Man franchise produced by Columbia, Marvel Studios and Avi Arad and Laura Ziskin, will have a new cast and filmmaking team. Spider-Man 4 was to have been released in 2011, but had not yet gone into production.

“A decade ago we set out on this journey with Sam Raimi and Tobey Maguire and together we made three Spider-Man films that set a new bar for the genre. When we began, no one ever imagined that we would make history at the box-office and now we have a rare opportunity to make history once again with this franchise. Peter Parker as an ordinary young adult grappling with extraordinary powers has always been the foundation that has made this character so timeless and compelling for generations of fans. We’re very excited about the creative possibilities that come from returning to Peter’s roots and we look forward to working once again with Marvel Studios, Avi Arad and Laura Ziskin on this new beginning,” said Amy Pascal, co-chairman of Sony Pictures Entertainment.

“Working on the Spider-Man movies was the experience of a lifetime for me. While we were looking forward to doing a fourth one together, the studio and Marvel have a unique opportunity to take the franchise in a new direction, and I know they will do a terrific job,” said Sam Raimi.

“We have had a once-in-a-lifetime collaboration and friendship with Sam and Tobey and they have given us their best for the better part of the last decade.This is a bittersweet moment for us because while it is hard to imagine Spider-Man in anyone else’s hands, I know that this was a day that was inevitable,” said Matt Tolmach, president of Columbia Pictures, who has served as the studio’s chief production executive since the beginning of the franchise. “Now everything begins anew, and that’s got us all tremendously excited about what comes next. Under the continuing supervision of Avi and Laura, we have a clear vision for the future of Spider-Man and can’t wait to share this exciting new direction with audiences in 2012.”

“Spider-Man will always be an important franchise for Sony Pictures and a fresh start like this is a responsibility that we all take very seriously,” said Michael Lynton, Chairman and CEO of Sony Pictures. “We have always believed that story comes first and story guides the direction of these films and as we move onto the next chapter, we will stay true to that principle and will do so with the highest respect for the source material and the fans and moviegoers who deserve nothing but the best when it comes to bringing these stories and characters to life on the big screen.”

The studio will have more news about Spider-Man in 2012 in the coming weeks as it prepares for production of the film.

MOVIES: What were the monsters in A Quiet Place?