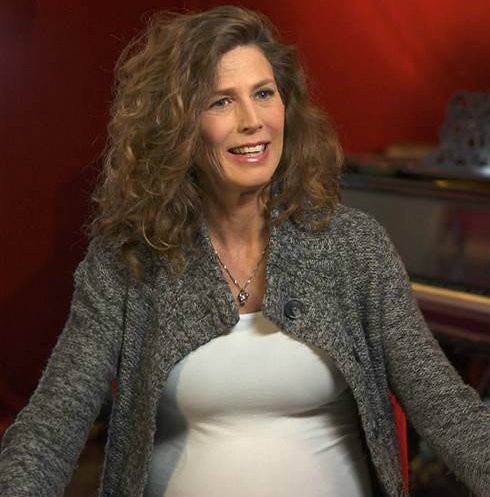 Months after announcing her controversial decision to get pregnant as a 50-year-old single woman, Sophie B. Hawkins welcomed a healthy baby girl this week.

“Dashiell and I are ecstatic to finally be with our beautiful girl,” the singer told Us Weekly on behalf of her and her 6-year-old son. “Our family is now complete!”

She added that the baby girl was born on Tuesday, July 7 and is named Esther Ballantine Hawkins — not Bubblegum, the name Dashiell suggested.

He fits right on the bump pic.twitter.com/2SxwEMwtaF

When she announced her pregnancy in February, the “I Wish You Were My Lover” singer explained she conceived using an embryo she had frozen when she was 31.

“Being 50 is actually an amazing age to have a second child,” said Hawkins, “because I am more wise, calm, humorous, appreciative, simple and clear.”

Just before her due date, she told The Today Show her pregnancy went smoothly. “[My doctor] said I’m the healthiest pregnant woman. I could’ve been 30 and had a lot more problems. At 50, I have no problems,” she said. “I’m most looking forward to lying in bed with Dashiell, ‘Bubblegum’ and our two dachshunds and relaxing. And just hearing all of us breathe and feeling our heartbeats.”