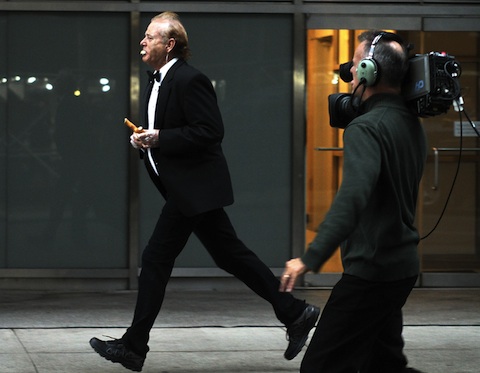 Hey, guys–remember how, for years in the late 00s and early ’10s, Bill Murray would sort of waffle on whether or not he would be a part of Ghostbusters 3? And then he’d ultimately say “No, that’s not for me,” and go back to being Bill Murray, and we were all more or less happy, since the chance of a third Ghostbusters film being good were not nearly as high as Murray would have to be to agree to it in the first place?

Well, evidently Sony Pictures never got that impression. Because they done got fed up with B-Mur, and kicked around the idea of suing him as aggressively as possible for his ways.

In yet another embarrassing e-mail revealed made public in the fallout from the Sony Hack Attack (#SonyHackAttack2k14), Sony legal guru David Steinberg suggested that the company “identify aggressive legislation” if Murray continued changing his mind. It’s not clear whether there’s some legal basis for any lawsuit Sony might have had, or whether the tactic would simply be to intimidate Murray.

But Billy M Style isn’t so easily intimidated, and Steinberg at least has the good sense to acknowledge that if the tactic went public, Sony would be “in much worse shape” than if they had simply left the man alone.

In order to more fully evaluate our position if Bill Murray again declines to engage on ‘Ghostbusters’, AG requested that we identify ‘aggressive’ litigation counsel with whom we can consult to evaluate our alternatives and strategize. Personally, while I’m fine with aggressive, I think we are in much worse shape if this goes public so seems to me we should look for someone who isn’t seeking the spotlight.

The studio has since moved on to an all-female reboot, so the situation is moot. Still, it’s fun to think of what great fodder the topic would’ve made for Murray’s periodic interviews on the subject.