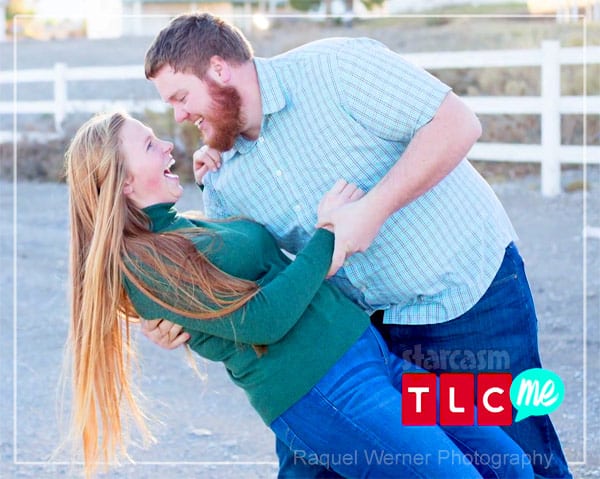 The Browns are quickly gaining on the Duggars for the title of TLC reality show family with the most engagement announcements! The latest Sister Wives star all set to tie the knot is Aspyn, daughter of Kody and his third wife Christine. 22-year-old Aspyn said “yes” to her 25-year-old burly beau Mitch Thompson during a romantic proposal in Seattle just before the new year.

“We got dressed up and took a walk to the waterfront before dinner, where he got down on one knee and asked me to marry him,” Aspyn tells People of the question popping. ” I was so happy, I said yes immediately and pulled him up to kiss me before he could even put on the ring.”

Here are some photos of the couple in Seattle posted the day before Mitch proposed:

Aspyn and Mitch (full name David Mitchell Thompson) met while the Browns still lived in Utah, and later reconnected at a rally. “We were raised in the same church group, and I had a little crush on him,” Aspyn reveals. “We went different directions until a rally some of my family attended in Utah, where we both happened to be. My dad’s brother asked what ever happened between us, which was nothing, because neither of us did anything about it. So I decided to call him.”

Mitch, who works as a carpenter, still resides in Lehi, Utah. It’s unclear what the couple’s plans are as far as a wedding date or location. “The dream wedding is anytime, anyplace just as long as we are getting married to each other,” Aspyn says.

One thing that viewers (and Kody) should be prepared for as far as the wedding is that Mitch is all about his Scottish roots and has been quite vocal on social media about his fondness for kilts. (I’ve got $20 that says we see Kody wearing a kilt at the ceremony with bagpipes playing.)

In their announcement video (included below), the couple reveal that they are already making plans to move in together — which I assume will be in Utah.

Aspyn’s mom Christine and a couple of Christine’s sister wives took to Twitter to share the People article and express their joy over the news being made public:

I am sooooo excited! Congratulations @AspynBrown and Mitch! You two are made for each other! https://t.co/3DIN3liv1t

Congratulations to Aspyn and Mitch! I’m a huge fan of all the Brown daughters and I’m thoroughly enjoying the wedding parade! Of course, I’m like everyone else in that I am just counting down the years until the biggest reality television event of the century: Truely’s wedding. 😉

Here’s the video announcement from Aspyn and Mitch, as shared by TLC me: