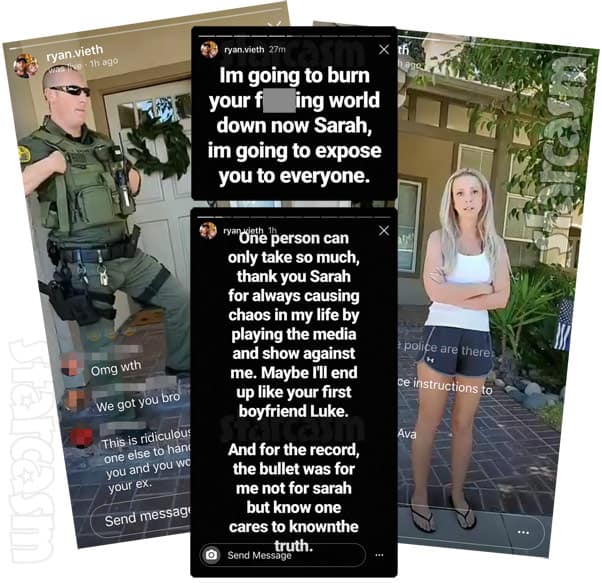 The Real Housewives of Orange County star Tamra Judge’s son Ryan Vieth and his ex Sarah Rodriguez continue their feud on social media. In the latest developments, Ryan shared a series of Instagram stories that included blaming Sarah for the suicide of the father of her first child. Ryan also clarified that the bullet in the photo he texted to Sarah was meant for him, not her.

Ryan later went to pick up his four-year-old daughter Ava from Sarah’s house only to find police officers on the scene after Sarah called them claiming that Ryan was suicidal. Of course, Ryan live streamed the whole thing!

Ryan states in the live stream that he was at Sarah’s house earlier in the day to pick up Ava, but she didn’t want to go at the time because she wanted to watch cartoons. He says Sarah invited him in and he went into the house. Some time between that initial visit and his return later in the day, Ryan shared a series of posts in his Instagram stories attacking Sarah.

Here are his posts — some screen capped, and the others transcribed. (I edited out the man in the Instagram photo, as well as some of the text in his caption.) 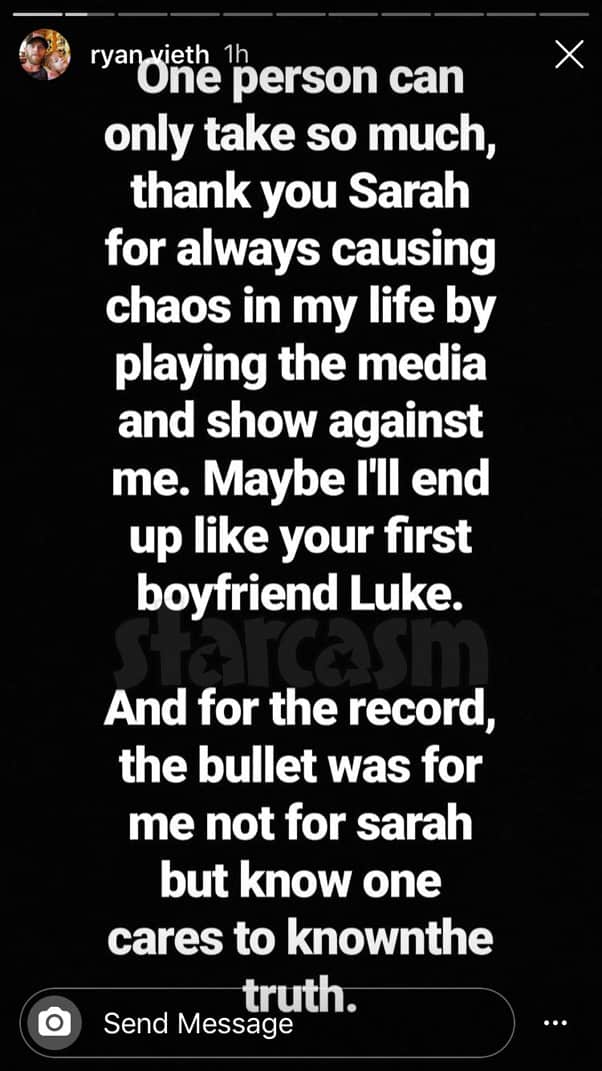 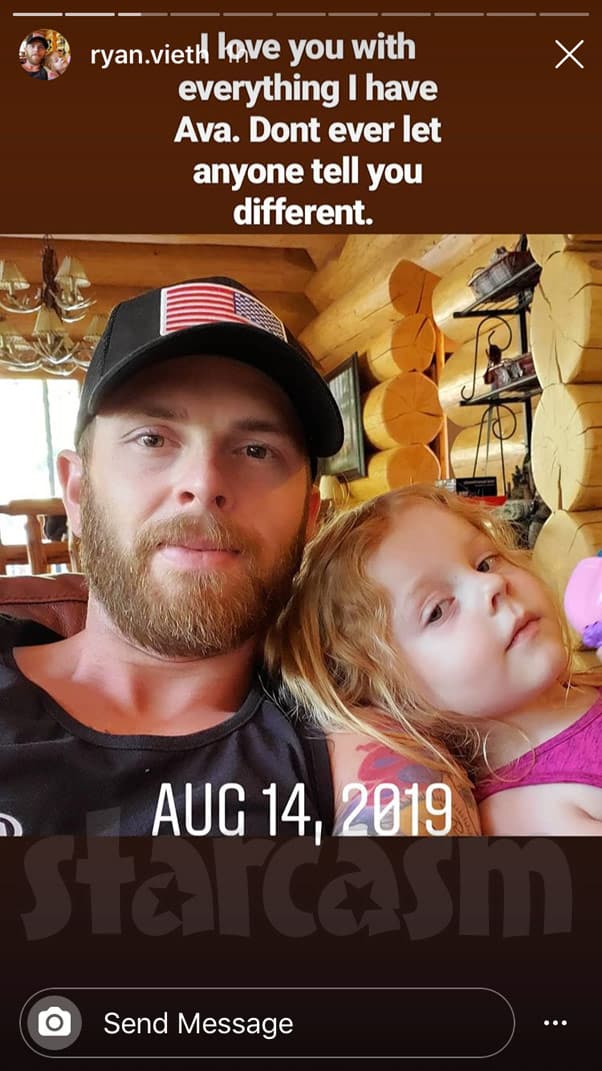 Sarah you know exactly what you’re doing, your first boyfriend committed suicide because of you. You’ve managed to manipulate the system and took your kids’ fathers out of their lives. You’re trying to take my daughter away from me also. You told people that every one of your exes is abusive. Every man you target is either rich or a public figure. I’ve had many people over the years reach out to me and tell me you’re a call girl and have sex for money. I hope your whole f**king world crumbles down on you.

I left Sarah two years ago because she wouldn’t stop fighting in front of the kids and she wouldn’t stop accusing me of cheating on her. The weekend I left she already started f**king her friend’s brother and even parked his Harley in my garage when I was still helping her pay rent for 2 months.

Let’s talk about the time she went on a dinner job interview and didn’t come home till the next day, missing her phone and her engagement ring. Turns out it was with another man. She came home and filed a gske police report stating she got robbed. 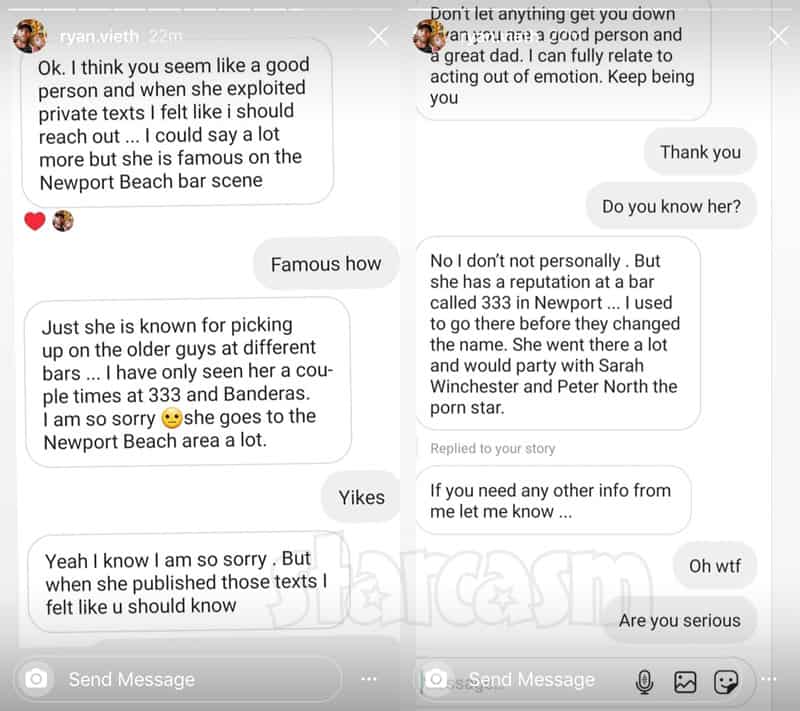 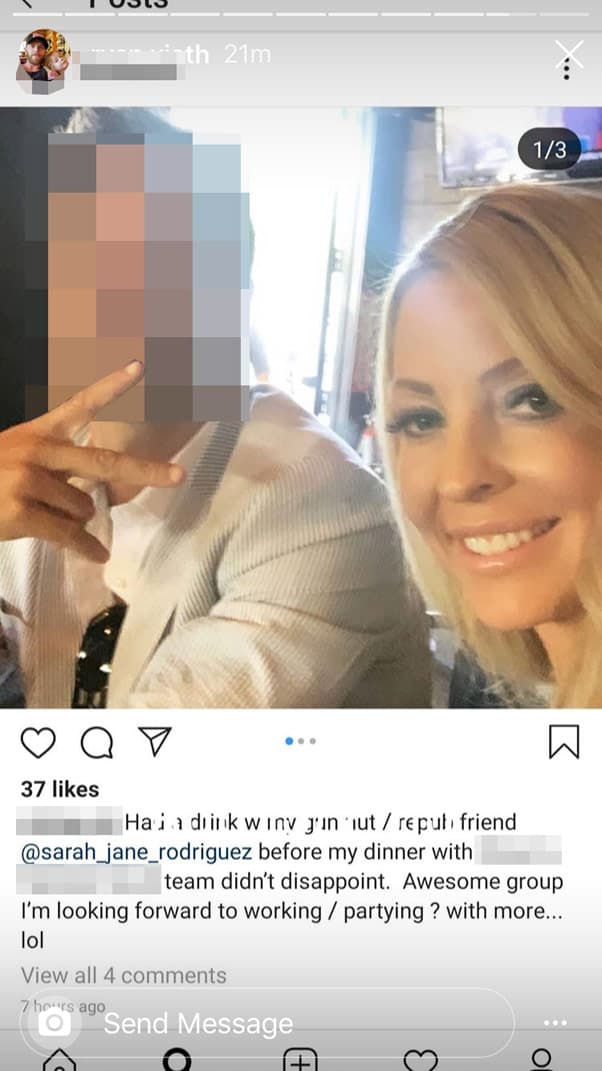 I questioned her about this guy. She claimed she never talked to him, the next day I found this on his Instagram. I told her it was over and that’s what sparked her to post the text messages. If she couldn’t have me she didn’t want anyone to have me.

In Ryan’s live stream, he is seen arriving at Sarah’s house with two police officers waiting. Ryan explains that he has 50/50 custody of his daughter Ava and it is his day with her, so he just wants to pick her up. The front door opens and one of the police officers enters the house.

Ryan narrates while waiting: “These are the games that I deal with all the time — constantly calling the cops misconstruing sh*t. I’m just here to pick up my daughter. She says that I’m now suicidal and that I cannot have my daughter. I put up with all of her sh*t because every single time I don’t, she threatens to keep my daughter or tell me I’m unfit.”

The officer later returns with Sarah, and Ryan explains to Sarah that he is filming everything.

“I’m just worried about your post,” Sarah explains. Here is more of their conversation:

SARAH: No, I don’t care about that. You have no proof of anything.

RYAN: Can I have my daughter?

RYAN: I’m calm. I came to pick up my daughter.

RYAN: I’m not going to kill myself. I’m not that stupid.

After a lot of back and forth in which Ryan explains to the officer that he has 50/50 custody and it is his day with Ava, he eventually asks Sarah directly if she will let Ava come with him. Sarah iterates that Ava does not want to go with Ryan, and he asks her to bring Ava to the door so he can hear her actually say that.

Sarah says she won’t bring Ava to the door because Ryan is filming and she doesn’t want to exploit their daughter. Ryan eventually agrees to leave. “I’ll see you in court,” he tells Sarah. “You do a good job playing the game, Sarah.”

After Ryan left, Sarah posted a zoomed-in photo of their custody agreement. Here is that photo, followed by Sarah’s caption and her interactions in the comments section in which she reveals that Tamra showed up after Ryan left demanding that Sarah let Ryan have Ava! 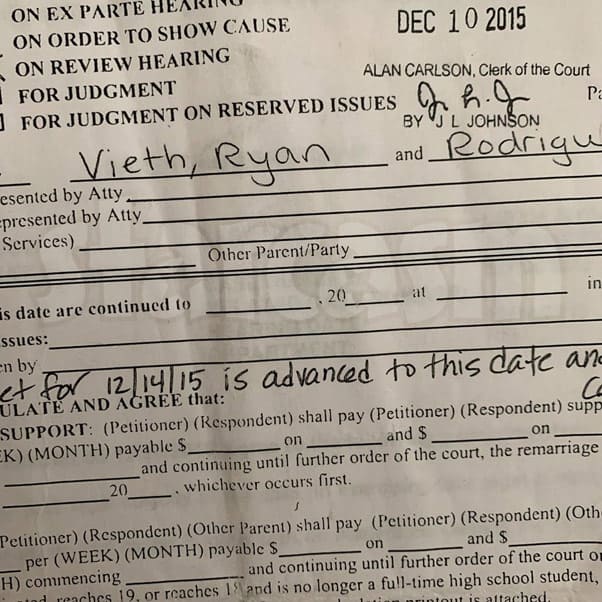 CAPTION: Court order says it’s my time!!! Why is it me that only has solid proof of everything? ??‍♀️

COMMENT: How about not making your awful relationship public. Your children are the ones that will be the most affected. Can’t you both call it a day on the back and forth? And maybe have a go between to pick up and drop off Ava when her father has her.

SARAH: He is this one that decided to go live saying I was in contempt of court!!

SARAH: Yes no kidding. I just had his mom and grandma show up yelling at me to give them my daughter.

COMMENT: It doesn’t say anything about custody dates.. so this proves nothing. Both y’all need to grow up. Subjecting your children to craziness.

COMMENT: Not saying ur wrong but this literally proves nothing. That’s all.

SARAH: I don’t need to open it up and show details to strangers. But he is claiming I am in contempt of a court order but these little words on this legal document here claim otherwise.

COMMENT: Ok, doesn’t he know what weekends he has her? Why would he just show up?

SARAH: You know the date we went to court. Weirdly I don’t get a new copy every day.

UPDATE – Sarah shared another post on Instagram talking about Tamra and her mother showing up. “So I just got ambushed by Tamra and her mom at my door,” Sarah wrote in a text graphic. “She recorded me without my knowledge, which is illegal, and now she is going to take me to court to get Ava taken away from me.” 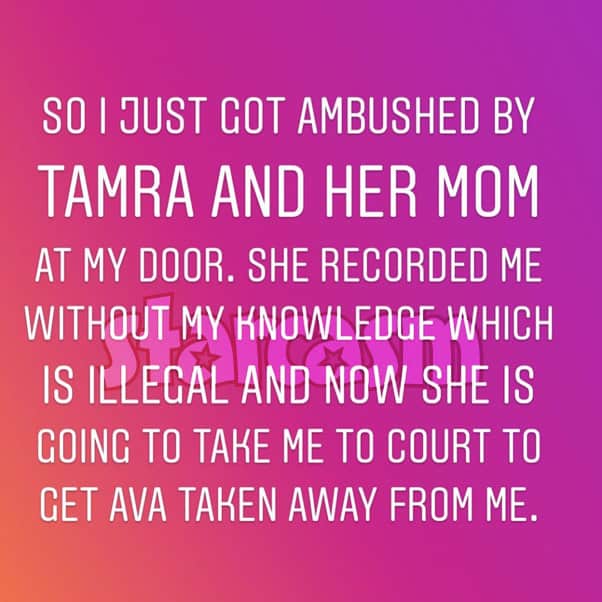 More from the comments:

COMMENT: You didn’t get your 5 minutes of fame with RHOC so this is your way to become famous now? What about your child who needs her dad also? The way you have handled this is wrong.

SARAH: Oh I have texts of Tamra asking me to film and saying no way. For the last 2 years. I am actually disgusted by all of this and enough was enough. They lie and play victim to the world. I needed to stand up for myself for once.

COMMENT: Why would she do that after the heartbreak of her own daughter not wanting her in her life. Sorry you are battling this.

SARAH: She doesn’t even have time to visit her.

COMMENT: So is it his day? You may have a problem if it’s in his day right???‍♀️

COMMENT: Why is his mom involved? He is a grown ass man.

SARAH: He sent them.

SARAH: I didn’t know I was being recorded. Ryan just told me over text which is illegal.

SARAH: Because she has money

COMMENT: Ugh…. why does she need to get involved. If the court papers state 2 pm every other Friday that’s what it is. Considering she has gone through this her self she should know.

SARAH: She is only involved when it’s gets publicity. Other then we don’t hear from her.

COMMENT: He has money? From his Garden Flag business?!

SARAH: Tamra is paying for a lawyer for him. You can hear her say that in her recordings. She just ambushed my home.

COMMENT: Call 911 next time…make a huge deal out of it..BRAVO wont put up with it..I’m sure he didn’t “quit”, my guess is they fired him, and if his mom and grandma continue I seriously doubt they’ll remain on the show…I don’t know the paternal grandparent law in CA but I know where I am grandparents have zero rights…he and his mom have tempers, YOU must remain calm and let them lose control..sounds like she did today, I doubt she keeps her job much longer either. Exactly why I don’t buy their CBD oil..I won’t give my hard earned money to maniacs.

SARAH: I did. They wouldn’t leave.

We will continue to monitor this story and will update with any major new developments.

UPDATE – Well, that didn’t take long! Ryan just posted a photo in front of Orange County Superior Court along with the following caption:

One thing you don’t do is mess with my daughter and I. You can play your games on social media, but now I’m going to fight for what is right. I am an amazing father, everyone knows this. She is my world, and to play like this is disgusting. I may not be the perfect human, but to do this is lower than low. And it’s unfortunate that it has to be aired in the public, but it’s time I stood my ground and do what I have to do.

It’s unclear if Tamra is with Ryan at the courthouse.

The social media feud between #RHOC's Ryan Vieth and his ex Sarah Rodriguez escalates as Ryan accuses Sarah of sleeping with former #TeenMomOG dad Dakota Meyer at a Vegas gun show while he & Bristol Palin were still working on their marriage! ? #OCmeetsOG https://t.co/x54VcTiCJ3

UPDATE – Ryan has posted a photo with Ava, which he captioned triumphantly: “?❤?‍??” Meanwhile, Sarah shared this video response:

Sara responds… and she posted photo of court order that it was her day… I’m so confused… ??‍♀️??‍♀️??‍♀️ In my opinion, they both need to stop already… for Ava’s sake. #rhoc #realhousewivesoforangecounty #ryanvieth #tamrajudge #stopalready #custodybattle #childcustody

UPDATE – And now Tamra is getting in on the post-and-deletes:

Well, well, well… Look who is posting and deleting??? Just this week Tamra was on WWHL & said Sara “posted & deleted” stuff on IG all the time and “she wasn’t buying into it.” This was in reference to the text messages Sara shared earlier in the week. The ones where Ryan is telling her (allegedly) there is a bullet for her. Hmmmm, ???, well Tamra, guess what??? Many of us are not buying into your BS either. Allegedly Tamra showed up to Sara’s home yesterday and said she was going to take Ava away from Sara. Nice Tamra, yeah, great way of showing how important Ava is to you. Perhaps Tamra should focus on her lack of relationship with some of her children and stay out of other people’s issues…??‍♀️??‍♀️??‍♀️. Oh yeah, so she (Tamra) deleted her initial post (about this not being her circus) and replaced it with some other one. Swipe to see it. I have a feeling BravoTV told her to nip all of this ? now. It certainly isn’t a good look for BravoTV to have a cast member threatening the mother of their child. It seems Ryan has deactivated his IG (for now), which is probably a good thing. Curious, thoughts on in-laws getting involved in custody battles??? #rhoc #realhousewivesoforangecounty #orangecountyhousewives #tamrajudge #custodybattle #bravotv #postanddelete