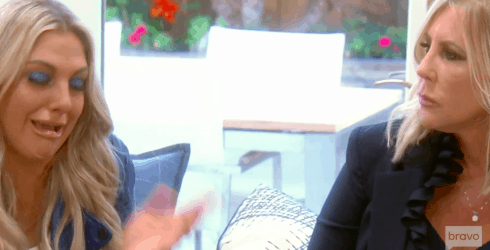 Real Housewives of Orange County‘s Gina Kirschenheiter’s great relationship with her ex-husband Matt has Vicki Gunvalson baffled. If Gina and Matt get a long so well, then why did they seek divorce?

Catmake Vicki Gunvalson sees Gina as a daughter-figure and has become personally invested in Gina’s divorce. She’s having trouble understanding why Gina is getting divorced in the first place, and fears that she’s making a mistake she’ll regret.

“It’s been frustrating for me to see her so casual about divorcing her husband,” Vicki wrote about the situation in a recent blog post. “It doesn’t make sense to any of us and I’ve come to the conclusion that there is a lot we don’t know.”

Vicki spoke further about her thoughts on Gina’s divorce, revealing that Gina still has a sexual relationship with her husband. “She says she has sex with him and she’s attracted to him and they have a great marriage; like, then why are you getting divorced?” Vicki asked in the podcast The Daily Dish. “I mean, those are the basics of you get along, you respect each other, you’ve got three small children, she doesn’t work. Why are you getting divorced?”

It may be that perhaps Gina still wants to maintain a close relationship without having the legal bonds of marriage. She still sees Matt as family, which is great because they have three children together. It seems that that while the two are good friends, they were starting to grow apart in life, especially after he started working in Los Angeles while she stayed in Orange County to film the show. The situation ended up with him basically living away from home for most of the week in an apartment in the city.

“It wasn’t easy,” Gina explained to People about their decision to part ways. “Matt and I were just coming out of the baby, baby, baby-phase and were recognizing that our relationship had run its course. At the same time, he had taken a new job in Los Angeles and was living there during the week. And I had made this commitment to come on this show.”

“Although we don’t have this romantic connection anymore, it doesn’t mean you can’t be family anymore. This idea that you’re divorced and no longer family to me is so backwards and dated and old school and I refuse to subscribe to it and we’re doing the best that we can to keep our family together. It just looks different now.”

In a preview clip for tonight’s episode Gina’s seen crying over potentially losing contact with Matt’s side of the family.

In another clip Gina talks about her shared custody plan with Matt for their three children: Nicholas, 5, Sienna, 4, and Luca, 2. Emily Simpson points out that perhaps Gina is trying to live in a “limbo” state between married and divorced.

It’s a girl! Please welcome the newest addition to our family. Hilda Kirschenheiter the German Shepherd ??? for the record I was against this and unanimously overruled. Also, pls excuse my pjs and no makeup as Sunday’s r fun days and family days but also scrub the toilet days in the Kirschenheiter household ???‍♀️ ❤️

Are Teen Mom’s Kailyn and Javi headed to couples’ counseling?