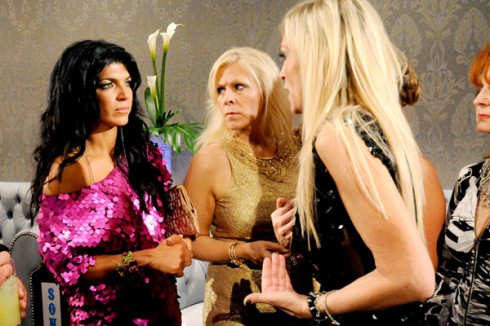 If you’ve been following most of the reporting from the upcoming season of The Real Housewives of New Jersey, it would appear that everything is coming up roses: Melissa Gorga and her kids came to Gia’s birthday party, Teresa Giudice and Melissa reconcile, and even Teresa and Caroline Manzo appear to have buried the hatchet. Yet, in typical Garden State fashion, the “Kumbaya” spirit didn’t last long. And as always, the drama started at Posche.

On March 30th, the Real Housewives of New Jersey cast was busy filming scenes for Season 5 at Posche 2, Kim “D” DePaola’s new store, which is apparently a boutique downstairs and a hair salon upstairs (and an all-around mecca for drama and gossip). As she is wont to do, Kim D decided to stir things up by inviting some known enemies of Melissa: Penny Drossos and Johnny Karagiorgis (aka Johnny the Greek).

If you’re wondering why those names sound familiar, it’s because they have been responsible for a lot of the previous behind-the-scenes drama on the show. (Case in point: it was at their salon where Kim D and Teresa just “happened” to meet Melissa’s alleged former strip club boss.) The couple has been stirring up plenty more drama lately, as they are reportedly behind rumors that Melissa cheated on husband Joe Gorga after they were married with ex-boyfriend Brian “Bulldog” Bowen, allegations that both Melissa and Joe firmly deny. Penny and the Gorgas recently had a “sit-down” where they addressed the “Bulldog” affair rumors.

Melissa, Teresa, Caroline, and Jacqueline were all in attendance at the Posche 2 party, but it was the men who reportedly started the drama this time. It all began when the Real Housewives men heard that Johnny the Greek had allegedly invited Brian “Bulldog” Bowen to confront Melissa about their alleged affair. And that’s not all! Apparently Chris Laurita overhead Johnny making comments about his son, Nicholas Laurita, having autism. When Joe Gorga, Chris, and Albie Manzo caught wind of all of the s–t Johnny was stirring up, they went ballistic, and got into a bloody brawl with Johnny destructive enough to rival the Gorga/Giudice Christening brawl of 2010!

It’s not like a Real Housewife to keep completely out of the drama, (“thicker than thieves,” right Caroline?), so of course Jacqueline got involved in the fight. Tom Murro tells Reality Tea’s that “Jacqueline kicked off her shoes and hopped up on a chair then b!tch-slapped Johnny on the back of his head with her left hand.” Atta girl!

The fight ended with security escorting a bruised and bleeding Johnny out of the trashed party, but at least nobody told Kim D to “go sniff another line” (we hope). Bravo, can we please get a start date for Season 5, already?!