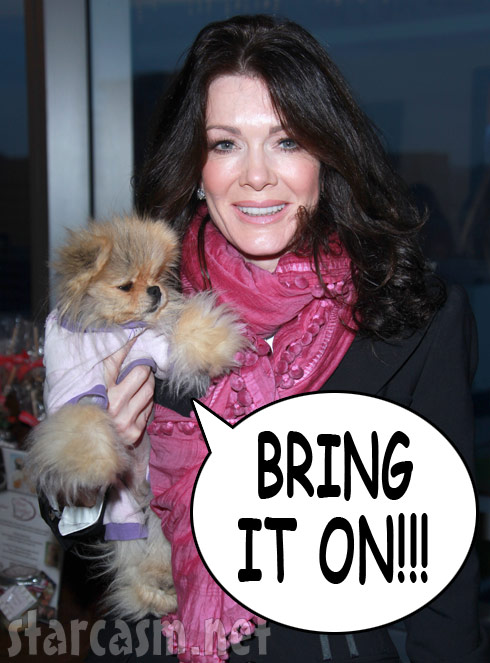 The Queen Bee of Bravo’s hugely successful Real Housewives of Beverly Hills Lisa Vanderpump was part of a scuffle that resulted in someone getting cold-cocked and the police being called! Thankfully, the one getting cold-cocked was neither Lisa nor Giggy but L.A. news reporter Robert Kovacik, who was sitting in a booth with Lisa, her husband Ken and two elderly people at the Beverly Hills Hotel’s Polo Lounge early this morning.

According to TMZ, who talked with Lisa about the incident, the trouble started when an “extremely drunk” man at a nearby table began harassing and taunting them verbally by shouting, “I’ve seen the show. You’re wearing a lot more make-up now, and your eyes are darker and smokier.” From TMZ:

Lisa says then it got personal, as he hollered, “What are you doing sitting with old people?”

Lisa says the man then walked over to her booth and continued his rant. That’s when Robert, a long-time reporter with the L.A. NBC affiliate, stood up and said, “Please stop.” Lisa says the man then cold-cocked Robert, punching him squarely in the mouth … and shoved Lisa’s husband to the ground.

Robert Kovacik was bleeding badly as everyone waited for the police to arrive, at which point Robert said he didn’t want to press charges. Lisa then reportedly took him to her neighbor Adrienne Maloof’s home so her husband, plastic surgeon Paul Nassif, could fix him up!

According to TMZ the attacker was not arrested and it is unclear if Robert will change his mind about pressing charges. Perhaps Paul Nassif will talk some sense into him when he returns to get his lip stitched up this afternoon. (Be careful Robert! Getting punched in the face is bad but keep your wits about you when the doc starts telling you how good you would look with lip implants!)

Lisa Vanderpump attacked? Where’s the outrage?!? Doesn’t this qualify as a hate crime?!? Are we sure this “extremely drunk man” wasn’t demon-souled “medium” Allison Dubois?

UPDATE – Lisa Vanderpump has tweeted about the attack! Here’s what she had to say: 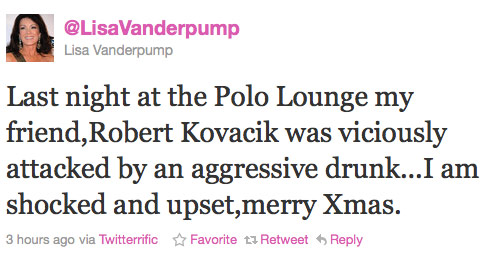 VIDEO Stephanie Pratt’s boyfriend dragged out of his Ferrari, roughed up by police

Real Housewives of Beverly Hills’ Carlton Gebbia is a witch