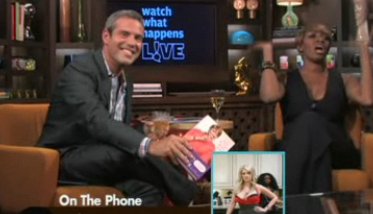 Thursday night NeNe and Kim had it out after Watch What Happens Live with Andy Cohen.

Andy read a passage from NeNe’s book stating that “Every dollar that chick has is somebody else’s husband’s money.” Kim retorted that she had a “high” income, though she didn’t mention from where. Then it turned into world war III. Through all of the shouting I made out Kim called NeNe  out for cheating with a man named “Charles” (which we now can assume was meant to be NFL player Charles Grant.)

I usually like NeNe more than the rest of the ATL girls, but she was not charming during this interchange. I don’t blame Andy for chugging down his bourbon and ginger in between “can you believe this is happening” grins.

Andy Cohen was having so much fun I think he might have peed his pants. Click below to watch the entire nine minute war of words:

Check out another Real Catfight between Ramona Singer and Nene Leakes!

NeNe Leakes is leaving The Real Housewives of Atlanta