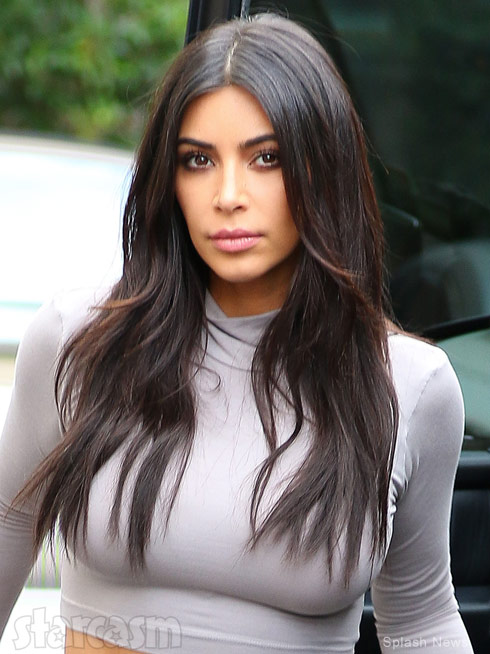 Kim Kardashian was once again the center of the universe after she posted a censored nude selfie last night, causing the entire world to lose its collective s**t. Kim engaged publicly with some of the more well-known critics, including Piers Morgan, Bette Midler, and Chloë Grace Moretz, in a series of uncharacteristically defensive and snarky tweets that had many wondering if perhaps she hadn’t handed over her social media keys to husband Kanye West or sister Khloe.

“Wait I can’t believe people thought Kanye or Khloe hacked my Twitter,” Kim later wrote. “I swear I’m funny too!!!” she added. Before that, Kim shared another nude photo of herself with #liberated as the caption.

Kim’s social media accounts were silent for a few hours after her Kanye and Khloe remark, apparently because she was working on a lengthy essay addressing all of the criticisms, as well as people constantly bringing up her infamous sex tape with Ray J.

Kim posted a link to her essay on KimKardashianWest.com on Twitter along with the message: “HAPPY #INTERNATIONALWOMENSDAY” Here’s the full essay from Kim:

Hey, guys. I wanted to write a post elaborating on my tweets last night. In all seriousness, I never understand why people get so bothered by what other people choose to do with their lives.

I don’t do drugs, I hardly drink, I’ve never committed a crime—and yet I’m a bad role model for being proud of my body?

It always seems to come back around to my sex tape. Yes, a sex tape that was made 13 years ago. 13 YEARS AGO. Literally that lonnng ago. And people still want to talk about it?!?!

I lived through the embarrassment and fear, and decided to say who cares, do better, move on. I shouldn’t have to constantly be on the defense, listing off my accomplishments just to prove that I am more than something that happened 13 years ago.

Let’s move on, already. I have. 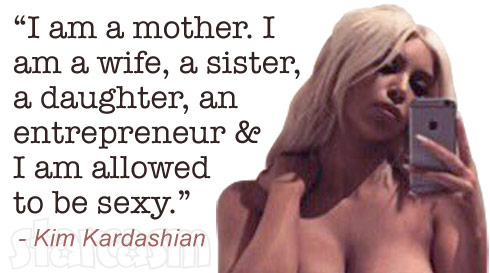 I am empowered by my husband, who is so accepting and supportive and who has given me a newfound confidence in myself. He allows me to be me and loves me unconditionally.

I feel so lucky to have grown up surrounded by strong, driven, independent women. The life lessons I’ve learned from my sisters, my mother and my grandmother, I will pass along to my daughter. I want her to be proud of who she is. I want her to be comfortable in her body. I don’t want her to grow up in a world where she is made to feel less-than for embracing everything it means to be a woman.

It’s 2016. The body-shaming and slut-shaming—it’s like, enough is enough. I will not live my life dictated by the issues you have with my sexuality. You be you and let me be me.

I am a mother. I am a wife, a sister, a daughter, an entrepreneur and I am allowed to be sexy.

We’re the first to have a little fun with our coverage of the Kardashian family, but we are also the first to admit that these women work hard — and work smart — to maintain and grow their fame. As for Kim in particular, as we previously wrote in a post trying to explain how she has earned every bit of the attention and money that she receives:

Paris Hilton’s former assistant, who had a sex tape with Ray J more than a decade ago, is without question one of the planet’s most famous people. That doesn’t happen by accident, or even just luck.

Hell, Paris Hilton was already super famous and then had a sex tape, and even she was passed by Kim in the fame game!

When I saw all the hub-bub about Kim’s latest photo I just laughed and said to myself (yet again): “Well played, Kim. Well played indeed!” Here she was the biggest story on the planet (yet again) and for what? A censored nude selfie? It’s so silly — and brilliant. We even tweeted this image as an ode to Kim’s mad troll-marketing skills:

Gotta hand it to @KimKardashian – she’s playin’ those haters like a maestro ??? pic.twitter.com/zHWPwpCCOB

If Marilyn Monroe had a Twitter account and tweeted photos like the one Kim shared, women would still be getting huge tattoos of those images on their bodies. And, with all this smack talk about Kim not deserving the attention that she receives, you can’t tell me she doesn’t work as hard–if not harder–than Marilyn Monroe herself! And Marilyn is completely revered! (Plus, you cannot discredit the huge impact of those nude Marilyn photos on her career.)

Perhaps it’s silly for Kim to complain that, regardless of what she accomplishes, there will always be somebody that’s going to feel superior by tweeting a photo of her having sex with Ray J along with some derogatory and supposedly funny message written across it in white capital letters. Perhaps. But, even so, that doesn’t mean that it’s not extremely frustrating for someone so successful at so many things independent of a sex tape.

Even if you insist that none of her successes could have been possible without being thrust into the spotlight courtesy of the publicity surrounding the sex tape, there’s still no reason to hate her for those successes, is there? She let her boyfriend tape her having sex with him, and, four years later it was released without her permission. She sued and settled for $5 million in damages. I just don’t get what these detractors would have preferred she do after that?

If you are in a sex tape scandal, does that mean you are not entitled to success? Does it mean you can no longer be admired or respected? Maybe it’s partly because she is a reality star to boot. People seem sooooo reluctant to accept that being a reality star is a job, which makes zero sense at all — especially when we’re cool with folks making millions hitting a ball with a stick or shooting themselves in the nuts with a staple gun on the big screen. Being paid to share your life in front of a TV camera for a show that makes money because people tune in is a job. Literally. It’s not really a debate is it?

Blah, blah, blah… I just wanted to celebrate International Women’s Day with some words of support for Kim. Not only do I admire her hustle, but I admire that she doesn’t seem like an a$$hole. (Yes, I intentionally chose that word instead of another in the interest of gender equality.) And this seemed like a GREAT topic for International Womens Day because there is DEFINITELY a sexist double standard when it comes to this sort of thing. It is AMAZING what we’ll forgive of men!

Here’s an interesting question: Did anyone actually read this far? I’m guessing I lost just about everyone after the nude hater cellist photo. 🙂 OK, back to our regularly scheduled Kardashian kraziness koverage…

Is Kris Humphries ‘legally’ the father of Kim K’s baby, according to California law?

Kim Kardashian “I don’t do fillers or Botox when pregnant”