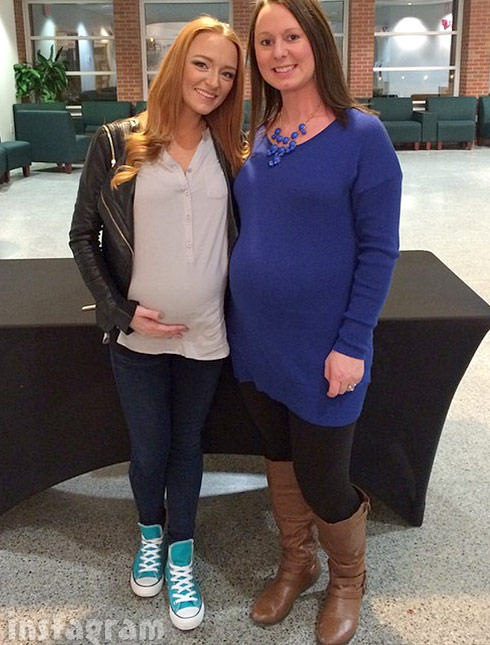 Teen Mom OG star Maci Bookout braved the bitter cold to make her scheduled appearance at Mohawk Valley Community College in Utica, New York Friday night where she talked to a sold out audience about the struggles of being a teen mom. In addition to speaking on stage and with local TV station WKTV, Maci also took time to pose for photos with fans, including the one above in which she compares her growing baby bump with that of a fan’s.

“My baby bump is way bigger than Maci’s!” The expectant fan wrote. (In case you missed it, Maci is currently pregnant with a little girl, that she reportedly will be naming Jayde Carter, by her bearded beau Taylor McKinney.)

Maci sat down with WKTV’s Rachel Murphy to talk about her struggles and some of the misconceptions about the show:

“There have been critics who have worried that airing this type of series somehow glamorizes teen pregnancy,” Rachel points out in the clip, “but Bookout says those who make that argument haven’t been watching the series closely.”

“It’s not like we’re living in mansions,” Maci says. “We’re not driving Ferraris around, you know? We’re really dealing with real life struggles of being teen parents.”

Rachel references one of the many studies that demonstrate the positive impact 16 and Pregnant and Teen Mom have had in lowering teen pregnancy in the United States. “According to 2014 study by the National Bureau of Economic Research 16 and Pregnant ultimately led to a 5.7 reduction in teen births in the 18 months after its premiere on TV,” she states.

As I mentioned before, Maci’s appearance was sold out, and judging from the overwhelmingly positive comments on social media after it was over, the event was a huge success. Here are a collection of responses from those in attendance with more photos of Maci Bookout (and her growing baby bump):

Here's the line for meet and greet with @MaciBookoutMTV after a sold out event in Schafer Theater! pic.twitter.com/gDWPaoyf4E

@MaciBookoutMTV loved meeting you and listen to you speak about your life. It was truly amazing! pic.twitter.com/N9cpK9iYM0

@macideshanebookout this was so awesome! She is so down to earth and such a nice person! So glad I went to this! #macibookout #teenmom #amazingperson

The best lecture I have ever sat through. So much good advice and and so relatable! @MaciBookoutMTV pic.twitter.com/HaFd5nk1Hc

Just met @MaciBookoutMTV and I LOVE she is naming her daughter Jayde! Especially the spelling and he lecture was so inspiring

@MaciBookoutMTV you were great tonight! Very well spoken & funny. Congratulations on your pregnancy!

@macideshanebookout You're such a sweetheart. Thanks for taking the time for pictures and I hope you enjoyed just a little bit of the cold I'll make a snowman for ya #maci #teenmom #mtv #macibookout

Thank you @MaciBookoutMTV for coming to MVCC. And congrats for the baby girl that's coming pic.twitter.com/UhMLWUIv63

I look extremely crappy man, it's been such a long day , I haven't been home for more then 10 mins today. But this DGV for school was so worth it. Me and Maci Bookout from 16 and Pregnant. #16andpregnant #macibookout #maci #awesome #she #is #a #sweetheart #mvcc #utica #newyork #new #york #mv #mohawkvalleycommunitycollege #mohawk #valley #community #college @macideshanebookout

@MaciBookoutMTV I never got to say gbye & wanted to thank you for last night, it was a lot of fun! Good luck w Jayde pic.twitter.com/0QLRnMrdbq

@MaciBookoutMTV It was our treat. You were a fabulous guest. Thanks for making the trek up north in the -12° weather. Stay warm!

You can see more of Maci Bookout when she makes her return to MTV on Teen Mom OG premiering March 23 at 10/9c.