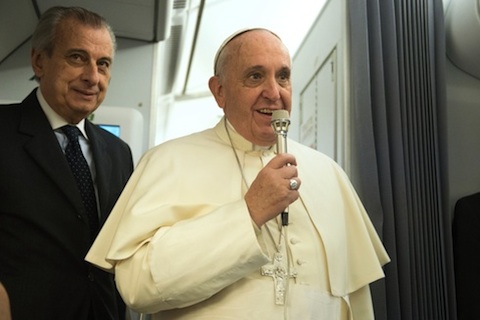 The interviews were actually conducted about a year ago, by Italian journalists Giacomo Galeazzi and Andrea Tornielli, in preparation for their book Pope Francis: This Economy Kills. Pope Francis appears to condemn gender manipulation by comparing it to the nuclear arms race, and saying that such scientific intervention goes against God’s order of creation.

Translated, the remarks are these:

Let’s think of the nuclear arms, of the possibility to annihilate in a few instants a very high number of human beings. Let’s think also of genetic manipulation, of the manipulation of life, or of the gender theory, that does not recognize the order of creation. With this attitude, man commits a new sin, that against God the Creator. The true custody of creation does not have anything to do with the ideologies that consider man like an accident, like a problem to eliminate.

“God has placed man and woman and the summit of creation and has entrusted them with the earth,” Francis concluded. “The design of the Creator is written in nature.”

The remarks intensify the controversy and seeming contradictions of the current Pope, who adheres to conservative Catholic doctrine on some issues while simultaneously appearing more approachable and loving than his predecessors. In January, for example, Pope Francis met and conversed with an openly transgender man at the Vatican; their discussion ended in a hug.