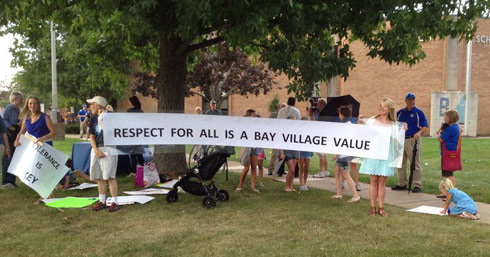 Police say they have identified the cruel pranksters who dumped feces and urine on an unsuspecting autistic teen.

A 15-year-old boy from Bay Village, Ohio thought he was participating in the Ice Bucket Challenge but instead was doused with a bucket containing feces, urine and spit. The resulting video went viral prompting celebrities Drew Carey, Jenny McCarthy, and Donnie Wahlberg to each pledge a $10,000 reward for anyone who could successfully identify those responsible.

If the Bay Village PD wants to start a reward fund to find who did this, contact me. I'll donate $10k. http://t.co/ugqeLbu5ob

“We are being very thorough in gathering all the necessary facts before presenting to the Cuyahoga County Prosecutor’s Office. We are not sure when that will happen because we have additional interviews to conduct and further investigative avenues to pursue. Regarding the celebrities offering rewards to help find who committed [these] terrible acts, reward money is not necessary as we have identified the participants. However, we are grateful for their offers and would like to assist if they are willing to contact the BVPD directly.”

No one has been charged yet or arrested according to Cleveland.com.

A lawyer for the family of the teen said that offers of support have come in from across the globe. Local residents staged a rally Friday to show their support for the teen and to promote tolerance. The attorney added that the family is cooperating with the investigation and believes that, “I think we’re going to have justice.”

If anyone wishes to make a contribution to the young man victimized in this crime they can contact the law firm of Valore & Gordillo.