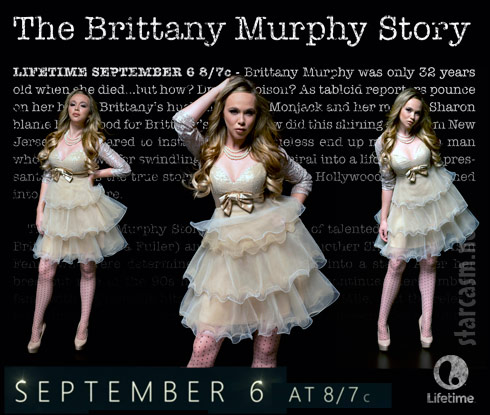 Lifetime has just released the first preview trailer for its upcoming biopic The Brittany Murphy Story, which will attempt to shed some light on the tragic story of one of Hollywood’s brightest stars who wrestled with a number of personal demons before being found dead from cardiac arrest stemming from pneumonia and anemia in 2009 at the relatively young age of 32.

The emotional clip features Brittany, played by Grey’s Anatomy actress Amanda Fuller, at various ages and is punctuated by text that reads: “Brittany Murphy. One of Hollywood’s brightest stars. Paranoid. Targeted. Afraid for her life. The suspects. The tragedy. The mystery. The Brittany Murphy Story.” (And in case you were wondering to yourself, “Who is that singing Haddaway’s ‘What Is Love?’ in The Brittany Murphy Story trailer?” the answer is Canadian singer Kiesza. Click here to download the full song from Amazon.)

At the end of the clip, Brittany’s husband Simon Monjack, played by Eric Petersen (below), is asked by a member of the media, “What killed Brittany?” His response is, “You did. You all killed her.” 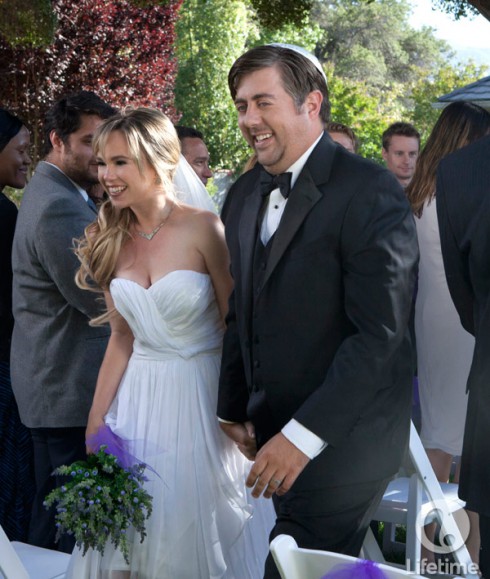 The Brittany Murphy Story follows the life of talented young actress Brittany and her supportive mother Sharon (Sherilyn Fenn) who were determined to make Brittany into a star. After her breakout role in the 90s hit Clueless, Brittany continued her climb to fame with high-profile hits Girl, Interrupted and 8 Mile. But the relentless rumors and paparazzi coupled with Brittany’s insecurities about her appearance and desperation for approval wreaked havoc in her personal life. Through it all, Sharon remained her grounding force but her enduring love wasn’t enough to save Brittany from the dark side of life in Hollywood.

The movie promises to try to answer some of the questions surrounding Brittany’s life and her controversial death. The primary cause of Brittany Murphy’s death was officially determined to be pneumonia, with secondary factors of iron-deficiency anemia and multiple drug intoxication. However, her father Angelo Bertolotti obtained independent lab results from tests done on samples of Brittany’s hair in November, 2013 that suggested she may have been poisoned.

The tests showed heightened levels of ten heavy metals and the lab report stated: “If we were to eliminate the possibility of a simultaneous accidental heavy metals exposure to the sample donor then the only logical explanation would be an exposure to these metals (toxins) administered by a third party perpetrator with likely criminal intent.”

The report also pointed out that “these heavy metals are most frequently found in rodenticides and insecticides. Her father knew that she had displayed the symptoms from heavy metal poisoning, including headaches, abdominal cramps, wheezing, disorientation, congestion and pneumonia.”

Adding fuel to the poison theory is the fact that Brittany Murphy’s husband Simon Monjack was found dead in the same house five months later, also from pneumonia and anemia.

“Brittany Murphy was only 32 years old when she died…but how?” the movie’s website asks. “Drugs? Poison?” In addition to her death, the movie will focus a great deal of attention on Brittany’s relationship with her husband, who will apparently not be shown in a completely favorable light. “How did this shining star from New Jersey who soared to instant fame in Clueless end up marrying a man who was known for swindling women and spiral into a life of anti-depressants?” asks the site, before concluding: “This is the true story of how Brittany’s Hollywood dream turned into a nightmare.”

Did Donatella Versace have a cocaine problem?