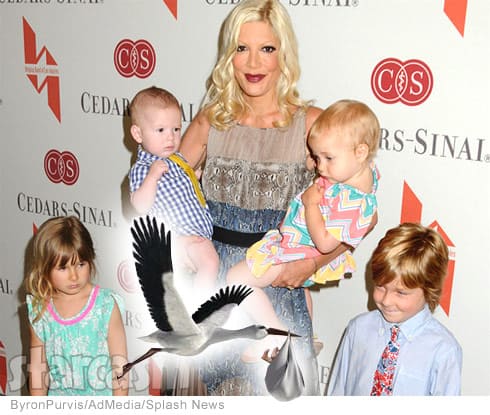 Tori Spelling is pregnant with baby number five! Tori opened up about her surprise pregnancy to People and followed up with a brand new family portrait on Instagram. In the photo, Tori and hubby Dean McDermott posed with their four children: Liam, 9, Stella, 8, Hattie, 5, and Finn, 4 while she cradled a barely noticeable baby bump. “So blessed and excited that our family is growing again! We’re expecting our 5th!” Tori wrote in the caption.

So blessed and excited that our family is growing again! We’re expecting our 5th! Get all of the details in this week’s issue of @people & click the link in my bio for more photos!

“It was a total surprise,” Tori said in the People interview. “But we always wanted a big family. I’m really excited.” She went on to talk about how Dean reacted to the baby news. It turns out that their fourth child, Finn, just got out of diapers not long ago. On top of that, all of the McDermott kids were in school now and Dean thought they were done expanding their family.

It’s #NationalEatOutsideDay which is the perfect excuse to soak up the last bit of summer & eat some great food outdoors with my babes! Incase you want to celebrate too, I’m sharing 5 ways to get into the holiday spirit on #ediTORIal (link in profile) #EatOutsideDay

That doesn’t mean that Tori and Dean aren’t excited about the surprise baby news. Tori even gushed that the unplanned pregnancy couldn’t have happened at a better time. Some have criticized Tori’s comment about the timing of her pregnancy, considering that she was recently ordered to pay $40,000 back to American Express. Tori’s debt and trouble in paying her bills issues that have been well documented for years.

Me and my mini-me cutie pies wearing matching mommy & me kimonos! A fashion must have! Thanks @haberdashsoulco use code : 'LOVETORI' for 20% Get them now! And she has great fabrics! #kimonos #Stella #Hattie #HauteFamily #NotAdJustFan

Tori and Dean recently celebrated their 10th wedding anniversary. The couple has said recently that they are in a good place now despite having a really rough patch just a couple years back where Dean admitted that he cheated on Tori with Emily Goodhand. Their marriage was touch and go for a bit, and many wondered if they would be able to overcome the cheating scandal but both have said that their relationship is very strong now. Fans of Tori Spelling tuned in to see the then-troubled couple working on their marriage during the short-lived reality series True Tori.

Despite all the ups and downs, Tori and Dean do look pretty happy with their growing brood. Congrats to them on the pregnancy announcement. Fans are definitely hoping to hear more about Tori’s growing baby bump as she embarks on another pregnancy journey.