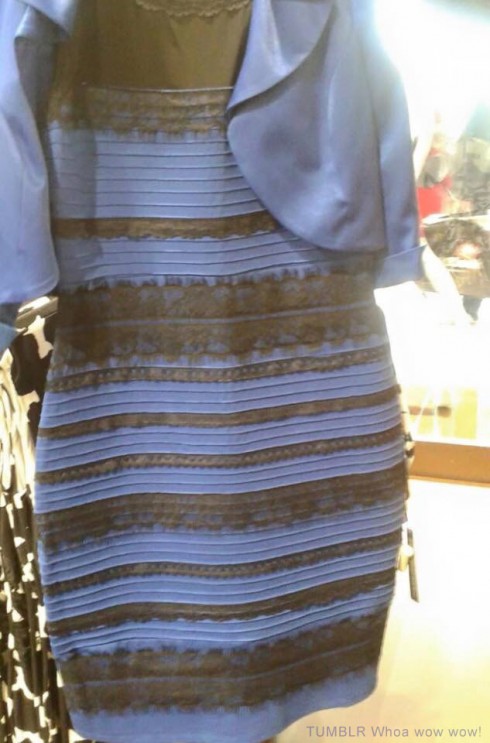 Unless you have been under a rock for the last twelve hours then you know the world is currently obsessed with two things: escaped llamas and #TheDress. The escaped llamas thing is neat and wonderfully quirky, but entirely rational and understandable. The dress, on the other hand, is a complete mind f*** that has me worried I’m caught in some sort of real-life horror movie like The Ring.

Let me start with a little context. This whole thing got started when Tumblr blogger Whoa wow wow (real name Caitlin McNeill) posted the photo above and wrote, “guys please help me – is this dress white and gold, or blue and black? Me and my friends can’t agree and we are freaking the f***.” out

The photo sparked a debate and Caitlin answered some questions explaining the origins of the photo and revealed that THE DRESS IS, IN FACT, BLUE AND BLACK. The questions are in bold and Caitlin’s responses are not:

Where did you find that dress picture? I can only see blue and black. My brain says you must be joking but I believe you. But how on earth could it look white and gold??

It was the mother of the brides dress at my friend’s wedding! She posted it on Facebook and everyone started freaking out. As they should it’s fuckin weird

I’ve always seen white and gold except from when my friend took a photo of it on his laptop with his phone camera, then I saw black and blue clearly. I’m so confused. Does anyone have any scientist pals???

the dress is white and gold

Well actually, in real life the dress was blue and black. But in that photo and that photo only….some people see white and gold. 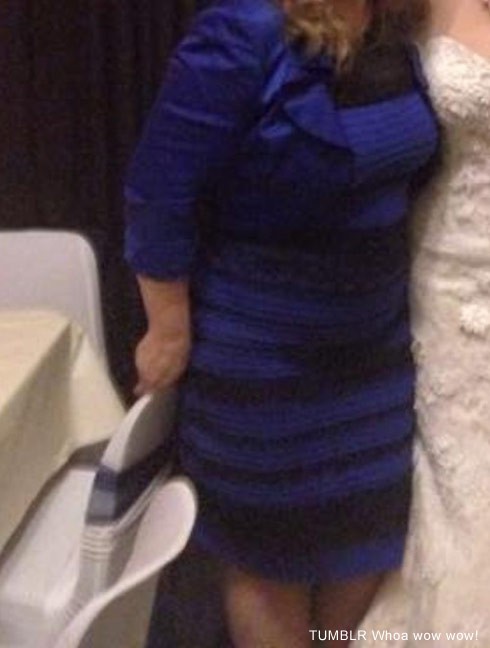 Caitlin, who sings and plays guitar in the band Canach, later spoke with Business Insider about about the origins of the photo and the debate. “What happened was two of my close friends were actually getting married and the mother of the bride took a photo of the dress to send to her daughter,” Caitlin explained. “When my friend showed the dress to her fiancee, they disagreed on the color.”

Caitlin later posted in on Facebook where the debate continued before she also put it up on Tumblr. And now, as Paul Harvey would say, you know the rest of the story!

Just in case Caitlin’s story and the second photo wasn’t enough proof for you, this appears to be the EXACT dress available for fifty pounds (about $77) from Roman Originals: 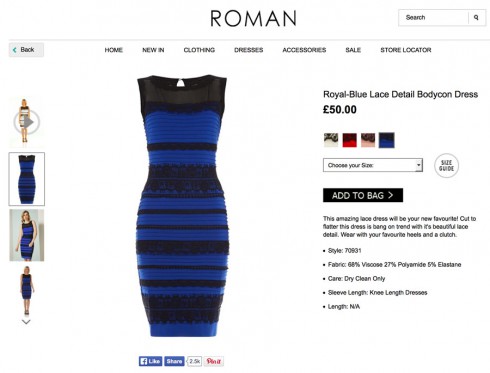 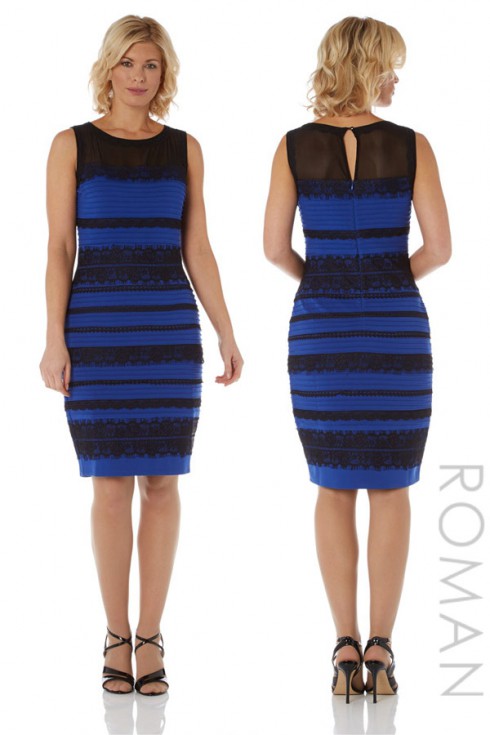 You’ll notice they do not sell the dress in white and gold.

So, in answer to the question “What color is the dress? Gold and white or blue and black?” The actual, 100% correct answer is blue and black.

BUT… This still doesn’t explain what kind of evil optical sorcery is freaking me the hell out!! When I first saw the photo is was clearly gold and white. I even joked with my friend at the time that we need to run all them blue and black people outta this country because they ain’t right! I created a funny Andy Warhol-inspired montage of the dress in multiple color schemes and even added an altered version to this website’s header.

About an hour later I return to by computer and I’LL BE DAMNED IF THE DRESS WASN’T BLUE AND BLACK! I CALLED MY FRIEND OVER… AND SHE AGREED!!!

My first thought was, “This must be an animated gif or something that changes ever so slightly over time. But, not only was the original file I saved a .jpg (which doesn’t support animation) but all of the versions I had saved (including the altered .png file in the header) were ALL blue and black now!

And just about when I was ready to concede that I was wrong initially and that it is, in fact, the gold and white dress people that need to be kicked out of the country, I’LL BE DAMNED IF THE DRESS WASN’T GOLD AND WHITE AGAIN!!

There have been tons of theories bandied about online, some of them seeming quite intellectual with all sorts of technical terms about light theory and brain waves, etc. But, they all sounded like bulls**t to me! How the hell am I suppose to sleep when there’s a dress out there that means I don’t know gold and white from blue and black?!?

And perhaps the most amazing thing of all is that Buzzfeed started a poll early on in the dress photo’s rise to world consciousness domination asking if people saw the dress as blue and block or gold and white and after more than one-and-a-half MILLION votes the results are:

If 72% of us can’t tell the real colors on that dress then I don’t have much confidence in anything. Of course, that could possibly help explain why Two and a Half Men was so popular. 😉