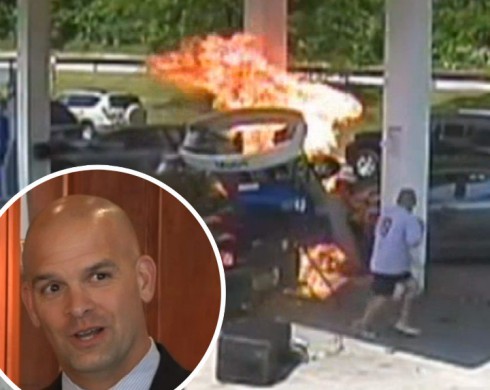 Veteran New York State Trooper John Vescio is being called a hero after he saved an elderly driver from certain death after a vehicle slammed into a gas pump earlier this month.

John was off-duty and filling his unmarked vehicle when the driver (69), who had blacked out behind the wheel, veered at high speed and rammed the pump next to him. In the surveillance footage Vescio is seen running from the frightening impact but he returns to pull the man out, even though flames had already erupted, after realizing he the driver was stuck.

“I got the door open, but you could see that the actual compartment was compressed,’ Vescio said at a Tuesday press conference in Manhattan. You could see the way his legs were tucked under by the seat, his seat belt was on, he was pretty much helpless.”

Here’s the incredible video from the accident:

Just before the inferno engulfed his vehicle, Vescio was able to retrieve his service gun and first aid kit from his vehicle.

The man whom Vescio rescued has since thanked him in person for his heroics.