The former Countess tied the knot to businessman Tom D’Agostino during a New Year’s Eve wedding celebration. The nuptials took place in front of 250 guests, including fellow Housewives Jill Zarin, Kelly Bensimone, Dorinda Medley (who was a bridesmaid), Cynthia Bailey, and Marysol Patton. 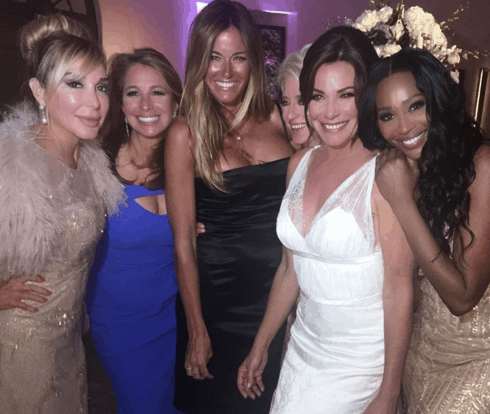 And the evening was extra special for Tom, as Luann explained. “Not only are we getting married, it’s Tom’s 50th birthday. And it’s New Year’s Eve. I want people to come and be a witness to a great wedding, a beautiful setting, a fun party, and the spectacularness of New Year’s Eve,” Luann said to People.

They cut the cake! Truly a magical evening so happy for you both! #blessings #weddingdress #luannandtomgotmarried ❤

Congratulations " Mrs D!" I'm so happy for you both and couldn't think of a better way to bring in the new year than celebrate the love you have for each other and every person in the room tonight. The most elegant wedding for the most elegant couple. Designer @randirahm outdid herself ! #10outof10 #happynewyear2017 #palmbeach #luannandtomgotmarried #braziliancourt #weddingweekend #imgettingmarried #realhousewivesofnewyork @bravotv thank you @thestyleduo for dressing me in @lapetiterobemi everyone loved my dress

Noticeably absent from the festivities were Bravo cameras. According to sources, Luann’s wedding was not filmed for the Real Housewives of New York. “I really didn’t want this wedding to be about the Housewives,” she revealed.

After her wedding to Tom, Luann will officially lose her title as The Countess, but she doesn’t seem to mind.

“Everybody loves to call me the Countess more than I call myself the Countess,” she said. “It’s part of who I am. But to lose the title, no, I’m going to be Mrs. D’Agostino and I’m super excited about that.”

Congrats to Tom and Luann!