21-year-old Yale student Cameron Dabaghi committed suicide Tuesday by jumping from the 86th-floor observation deck of The Empire State Building in New York City. Dabaghi, originally from Austin, Texas, was dead when medics arrived on the scene around 6:30 PM.

According to eye-witness accounts, Cameron had to take a running start to clear the ten-foot-high spiked fence that surrounds the observation deck. From The New York Daily News:

“He came down in front of the Bank of America. Boom! It was an explosion,” said Luis Mosquea, 28, who was manning the front entrance of a women’s boutique on W. 34th St., across from where the man landed.

“His body was shattered and his sneakers were scattered on the sidewalk,” said Mosquea, recalling in horror how stunned pedestrians scampered in every direction to flee the nightmarish sight.

“One guy ran over and covered the body with an umbrella,” he said. “It’s crazy.” 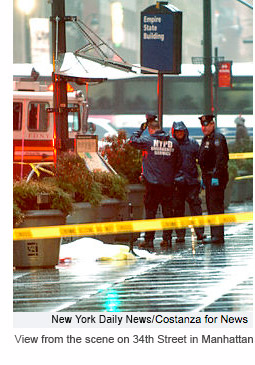 There isn’t much information yet available on Cameron Dabaghi, but here is what I was able to piece together from researching him on the internet:

Cameron, his sister and older brother  were excellent tennis players as members of the Austin Tennis Academy where Cameron won the Student Athlete Award in 2006. Cameron has numerous entries online recording his tennis career prior to attending Yale, including THIS ONE at TennisRecruiting.net, which listed Cameron as a one-star recruite with his ranking topping out at #612 in the nation in 2007. TennisInformation.com has a detailed history of the tournaments Cameron participated in with results.

Cameron also liked to bet on tennis! He had an account with Cent Sports which allows you to bet on sporting events free for the chance to win a dollar or two if you do really well. Cameron had 17 cents in his account and last placed a bet on Verdasco vs. Tsonga on January 26 of 2009.

Cameron Dabaghi participated in a summer program at Stanford University in 2004 where he took “Philosophy and Religion” from instructor Valarie Kaur.

While studying abroad in Peking in November of 2009, Cameron wrote an article for Yale Daily News titled “Dabaghi: Obama’s trip to strengthen ties in Asia.” The article is extremely well-written and describes the importance of President Obama’s first trip to Asia. For those wanting the Cliff’s Notes version, here are the opening and closing paragraphs:

President Obama has just begun the first Asian tour of his presidency, arriving in Japan today with plans to continue on to Singapore, China and finally South Korea. While he has been criticized both for leaving the home front with the tenuous health care bill on the line and for using this trip as justification for not going to Berlin last week, he is right to make relations with Asia a priority. This trip is absolutely necessary in order to strengthen ties with countries that play a vital role in powering the global economic recovery, combating climate change and containing nuclear threats from North Korea and Iran.

With China there will certainly be some tiptoeing around areas of conflict, but the trip provides the opportunity for Obama to initiate dialogue now in order to make real progress in the future. How the U.S.-China relationship plays out will be the dominant force shaping the 21st century, and it is no surprise that Obama has chosen to spend four days of the seven-day tour in China. As East Asia continues to grow in importance, we should hope to see more trips in the future.

Intelligence seems to run in the Dabaghi family. As I mentioned earlier in the post, Cameron’s sister is also a student at Yale. Cameron’s older brother is a Fulbright scholar at Duke University currently studying in Mexico.

That is about all the information I could find on Cameron Dabaghi, who appears to have been an incredibly bright young man with an equally bright future ahead of him. Perhaps more details will emerge soon explaining why he would want to take his own life at the very young age of 21.

Decapitated head of patron saint of genital diseases for sale