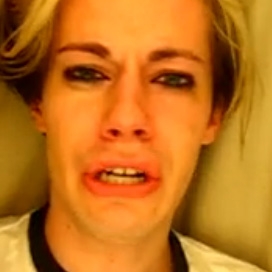 Chris Cocker was in drag, and in full top drama-queen form when he ruled the pop culture viral video scene in 2007 with his “Leave Britney Alone!” performance. It was straight on the heels of massive Britney backlash against her lackadaisical MTV Video Awards performance that sent her and her career into an epic tailspin.

Chris, with his mascara running screamed out against the hypocrisy of those who dared to diss Ms. Spears: “All you people care about is readers and making money off of her. She’s a human! LEAVE BRITNEY ALONE!”

Chris before and after gender transformation. He really does pretty well either way:

How much money does Britney Spears make?