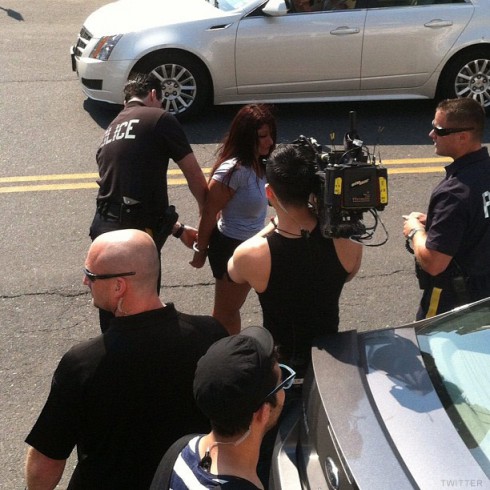 In “the sky is still blue” news, Jersey Shore star Deena Cortese was arrested earlier today after Seaside Heights Patrolman Chris Linnel spotted her in the middle of the road looking inebriated and slapping passing cars. Police Chief Tommy Boyd said of the incident, “Nothing major, but we can’t put up with it.”

Since the incident took place on a busy street in broad daylight, there were a number of folks present who shared their accounts live as it happened on Twitter. The photo above of Deena being escorted to the police station in handcuffs was shared along with the tweet:

Deena getting arrested in front of #jrs #jerseyshoreproblems #wasted 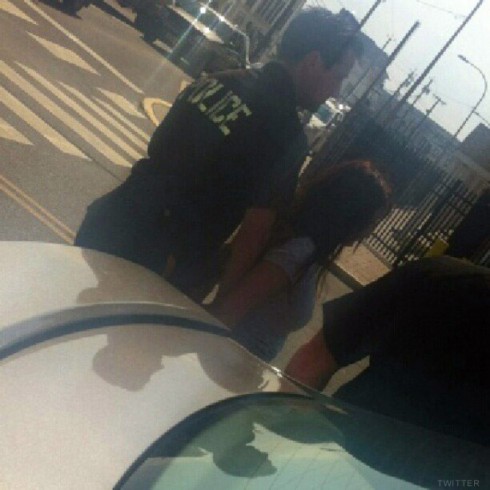 More detailed accounts included this series of tweets from an eye witness which seems to suggest Deena’s arrest wasn’t the only drama happening:

Currently watching deena from the jersey shore getting arrested

yeah, Deena was dancing wastedddd in the middle if the street and was arrested right in front of my car hahaha

And this one from an obvious Jersey Shore fan is great:

The fact that I saw deena get arrested and Ronnie and Sam arguing and then driving home saw mike and Pauly D in a escalade made my day !

And how about a before and after tweet from someone that was apparently hanging out with the JS crew when it all went down?

SHE GOT ARRESTED IM DONEEEE

According to Radar Online, “Deena was taken in handcuffs to the Seaside Heights police station where she was served a summons and then released.” I’m guessing since she was just served a summons that she wasn’t actually booked so there will be no Deena Cortese mug shot photo 🙁

UPDATE – Here is Deena Nicole Cortese leaving the police station after her arrest with her mom and dad: 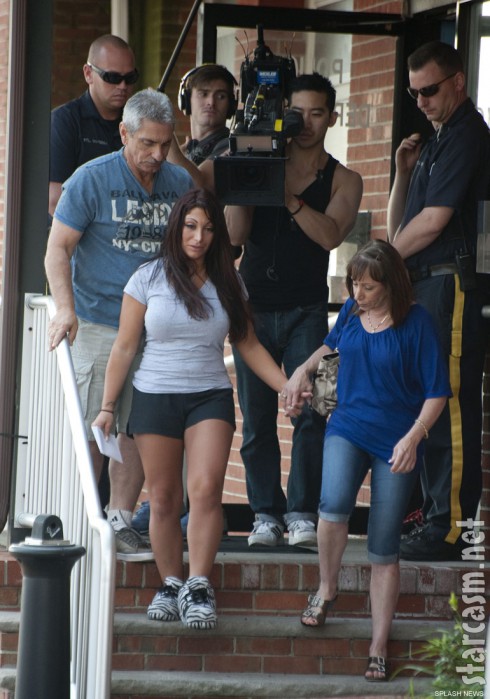 In case you missed it, a few of the Jersey Shore cast members were reportedly involved in a massive brawl at the Bamboo Bar Friday night as well, which has resulted in at least pending lawsuit as well as an injured ankle for JWoww. In other words, It was a fairly usual weekend for the crew. (It should be noted that Snooki, who is pregnant and living in a separate house while Season 6 is being filmed, has managed to avoid being involved in any of these shenanigans.)

Cops looking to flush out “poopgangsta” after Christmas Eve shooting