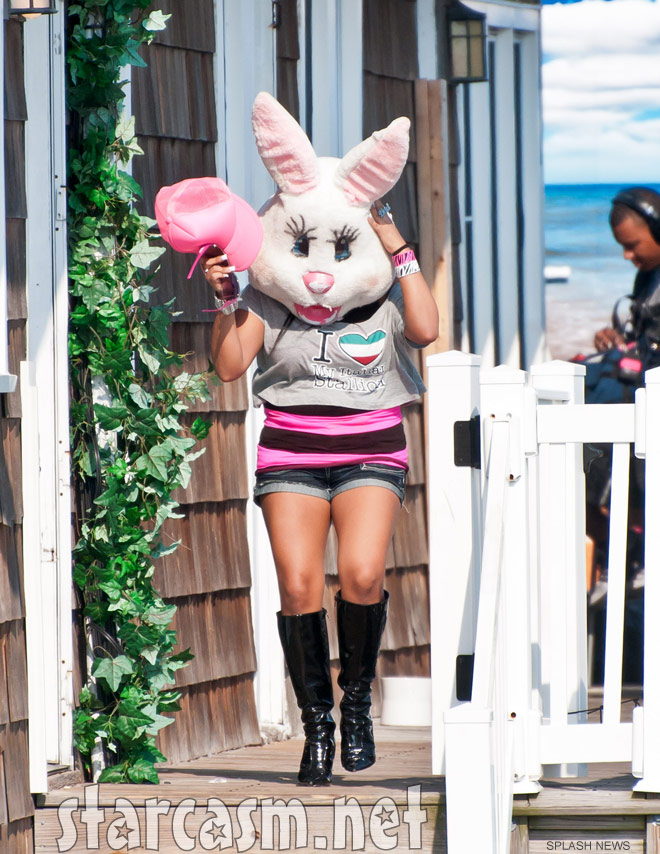 It seems that the cast of Jersey Shore have done the impossible by living together for almost 10 weeks straight without someone getting killed! The guys and gals followed up their Season 4 sojourn in Italy with five more weeks of dramapalooza back in their old Seaside Heights diggs where it all began for Season 5. The beleaguered survivors looked surprisingly chipper as they parted the famous party shack for what could very well be the last time.

Snooki (seen above) acted out the phrase “hare today, gone tomorrow” by sporting a bunny head as she packed up her stuff for the trip home. 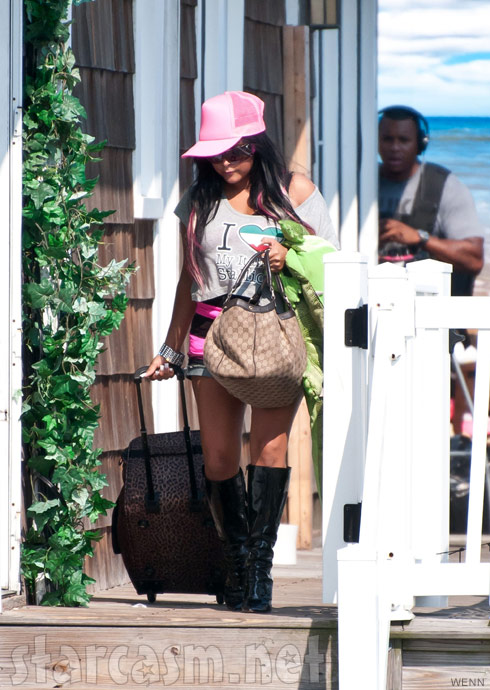 Snooki without a hare on her head looked a bit sad as she wrestled her baggage down the infamous wooden stairwell wearing a big pink ball cap, shades, black boots and an “I Love My Italian Stallion” t-shirt. (Photo: C.Smith / WENN.com) 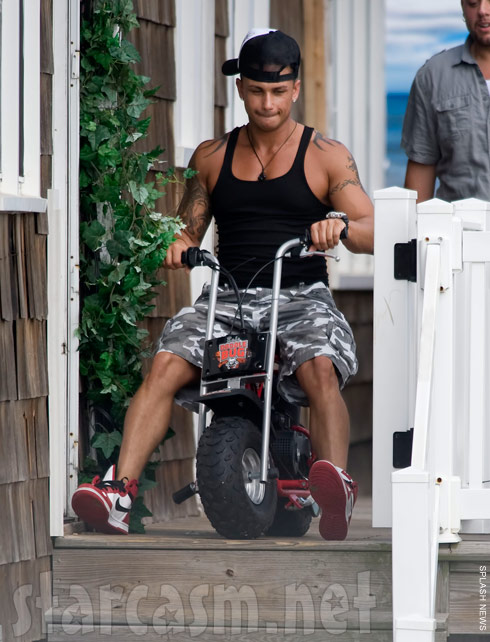 Pauly D threatened to launch his new daredevil career as Guido Knievel as he perched himself on a miniature motorbike atop the stairs before electing to put his gymhanced musculature to work by carrying it down instead of riding it. (Photo: Mejia / Asadorian / Splash News) Actually, this is the second known appearance of Guido Knievel – CLICK HERE to see lil Pauly D on a dirt bike “before the fame!” 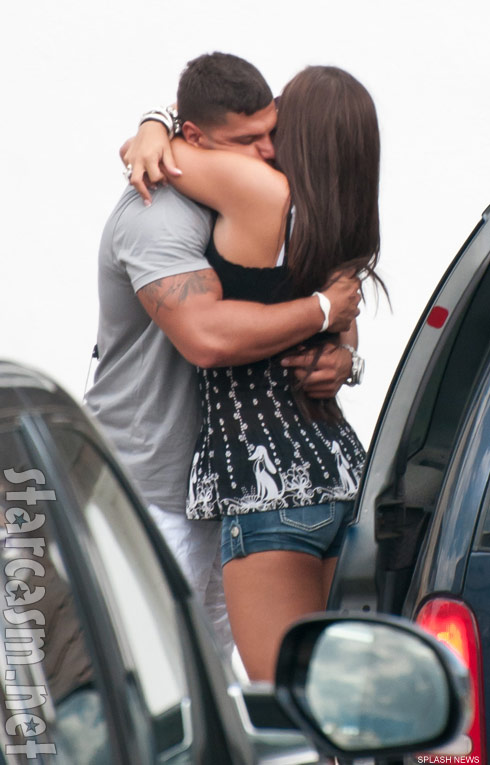 The Ronnie Ortiz-Magro and Sammi “Sweetheart” Giancola relationship coin flip came up “together” as the two appeared emotional and affectionate during their departure. (Photo: Thelonius / Splash News) 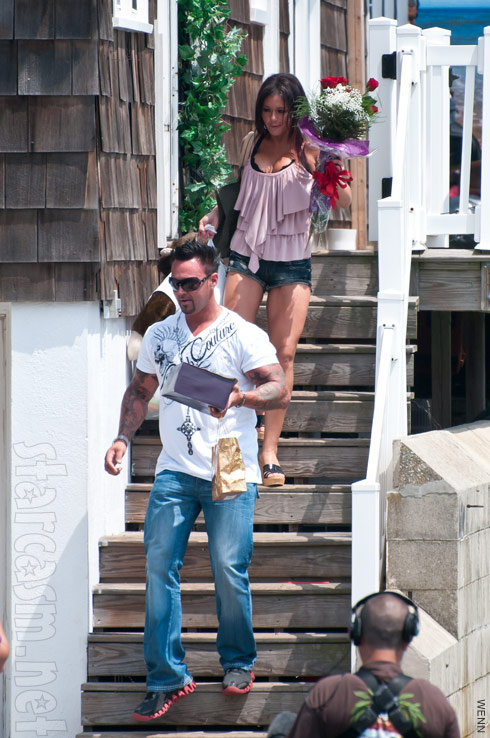 JWoww was her usual badass-but-still-a-lady self as she toted some flowers dropped off by her boyfriend, Roger Matthews, who was there to lend a hand. (Photo: C.Smith / WENN.com) 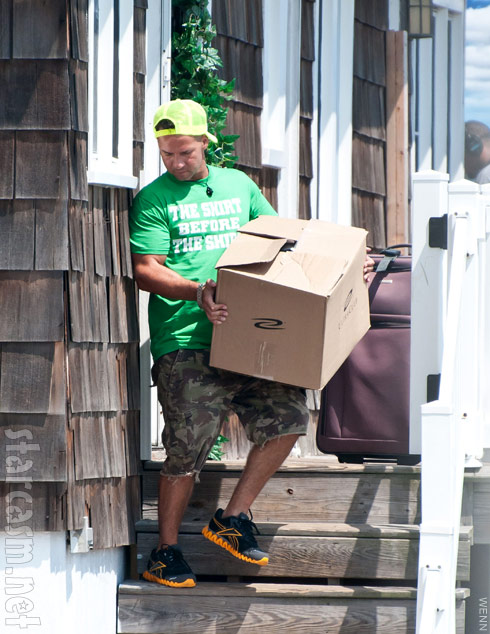 Mike “The Situation” Sorrentino was his Situation self sporting a “The shirt before the shirt” t-shirt and carrying a cardboard box full of The Situation Workout DVDs. (Photo: C.Smith / WENN.com) 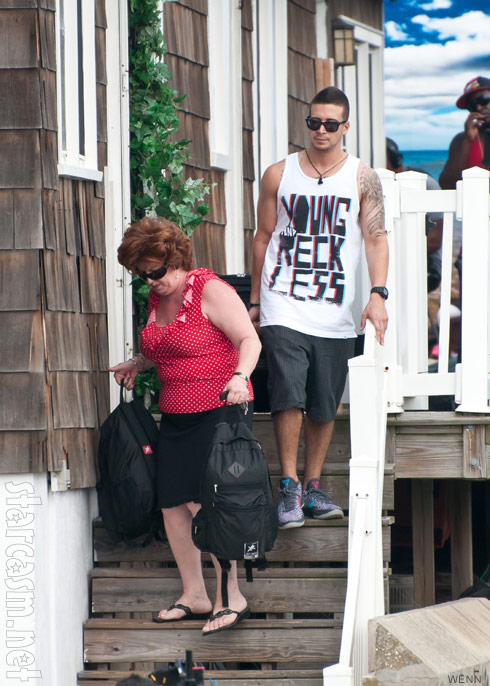 Of course “Momma’s boy” Vinny Guadagnino had his momma there to help him! (Photo: C.Smith / WENN.com) 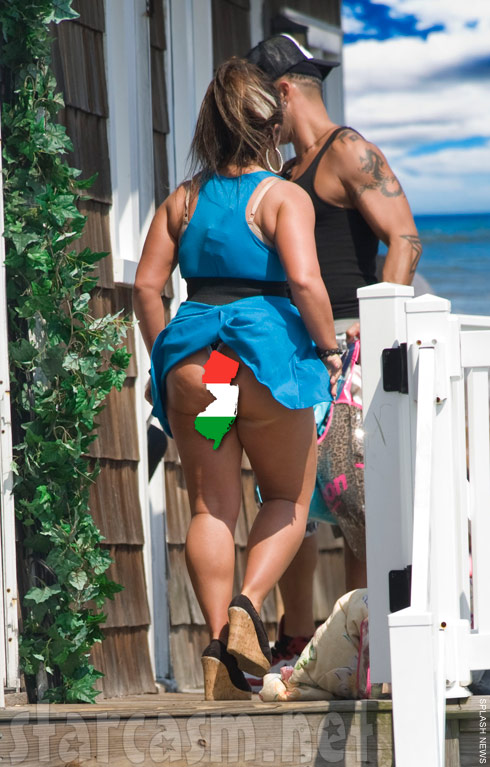 And to wrap things up there was Deena Nicole Cortese, who officially set the record for most paparazzi ass cheek photos in a three month period by baring her bottom for the 373rd time since her arrival in Florence, Italy – this time thanks in large part to either a stiff breeze or (my apologies in advance) a rather large helping of beans for breakfast. (Click the photo for the pseudo-SFW-ish uncensored pic. As is often the case with Deena, she is in fact wearing thong underwear so I think it’s technically what, PG-13?) (Both Photos: Mejia / Asadorian / Splash News)

In all fairness to Deena and her infamous baDeenadonk, it seemed a little unfair to end things on that note, so we’ll spin her around and catch a rare glimpse of her face… 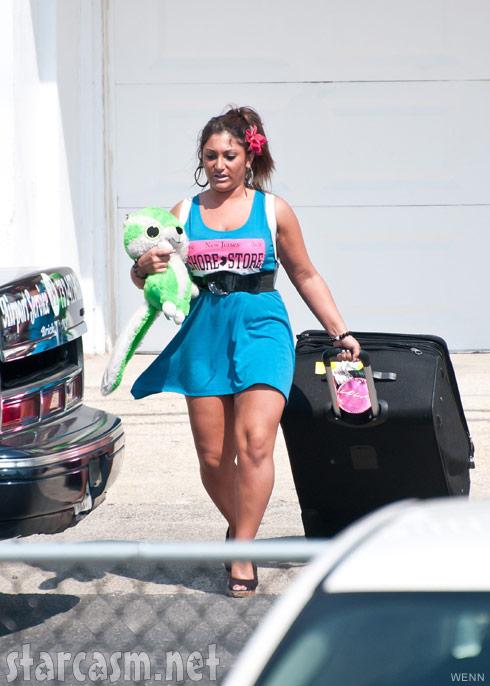 I have to hand it to MTV – their timing on this was amazing. They wrapped up filming on Season 4 in Italy and made the surprise announcement to the cast that they were going to immediately begin shooting Season 5 in Seaside Heights when they returned to the U.S. So now they have two seasons in the can and the cast is set free just two days before the Jersey Shore Season 4 premiere! Brilliant!

Tune in August 4 at 10/9c for the Jersey Shore Season 4 premiere on MTV!