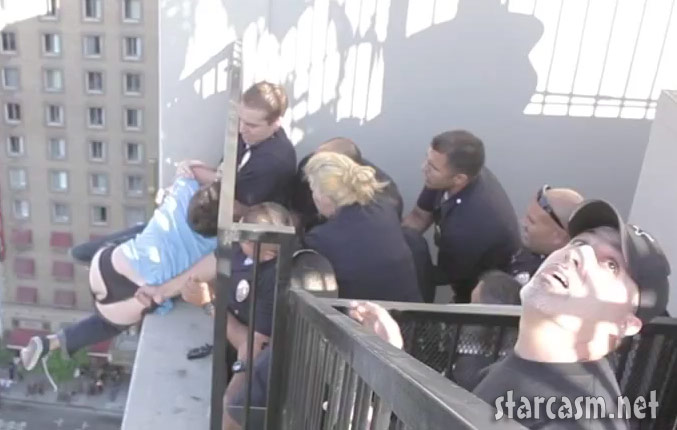 When a police officer takes that sacred oath to serve and protect he or she never knows what that call to service may entail. For a group of brave and dedicated Los Angeles police officers it recently involved dangerous heights, a suicidal man and an atomic wedgie.

In the following clip you see a group of officers doing their best to keep a man who had positioned himself on the roof of a 13-story apartment building from falling to his death. Their first act was to handcuff the man to the railing you see in the frame. After this they did their best to get the man lifted and in the process used whatever they could grab including the man’s black whitey-tighties which resulted in possibly the most well documented atomic wedgie in history.

The man in question bit the officer who was trying to hold onto him and was distraught over a breakup with his girlfriend. Firefighters were able to cut the railing and then pull the man to safety, he was not arrested but was taken to a hospital for evaluation. In the end this story has a happy (and exposed) ending.

MUG SHOT Four-year-old accidentally takes mother’s 249 bags of heroin to school, gives them out in class