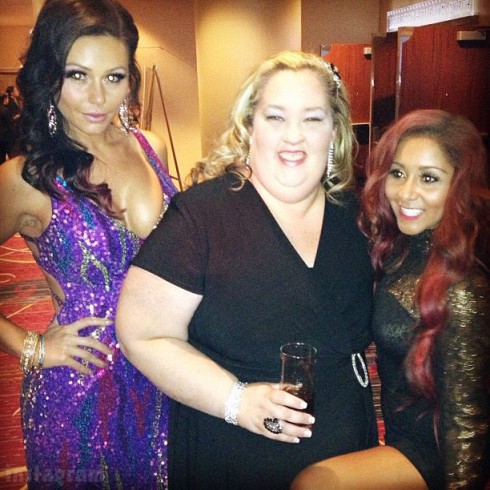 Despite Here Comes Honey Boo Boo‘s reputation among detractors and those who have never actually taken the time to watch it, it’s actually a very positive show. Sure, the girls like to play in the mud, holler and say “fart” a lot, and the family’s dietary habits are just deplorable, but once you look past the lack of etiquette (and money) and the overabundance of cheese puffs, what you have is a loving family that celebrates individuality seemingly completely devoid of discrimination. (You can read more of our thoughts about this here.) That aspect of the show was recognized by the Gay & Lesbian Alliance Against Defamation with a nomination for Outstanding Reality Program at the 2013 GLAAD Media Awards, and Mama June herself flew to New York City to receive the redneckognition in person!

From the red carpet: 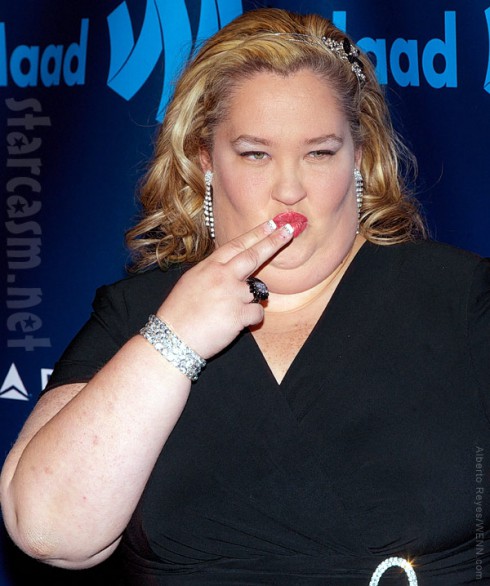 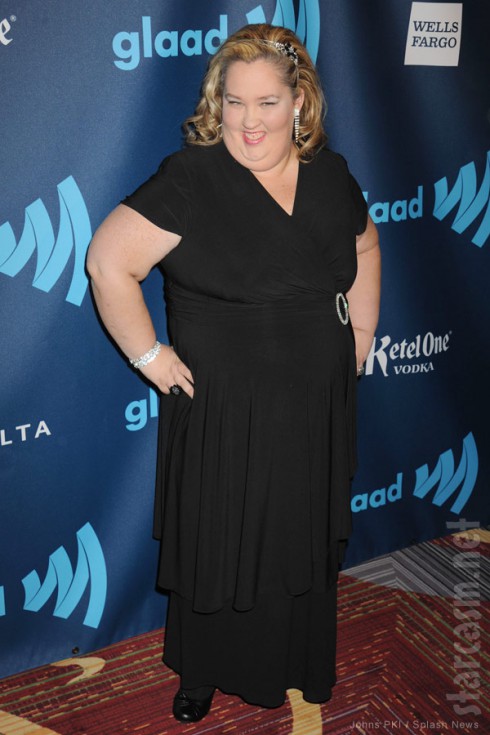 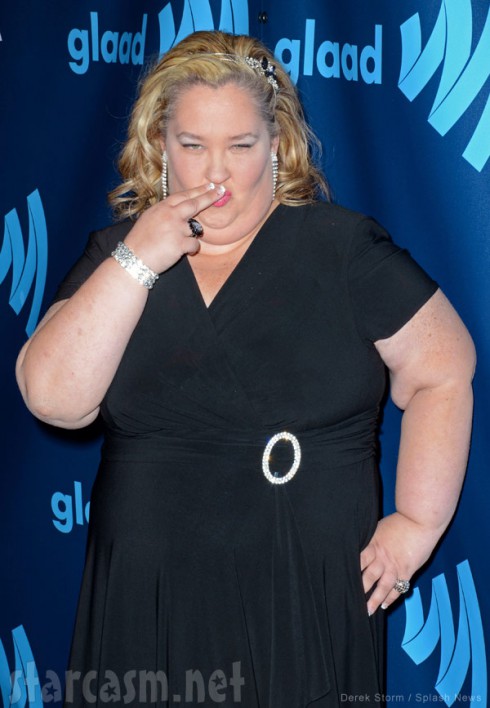 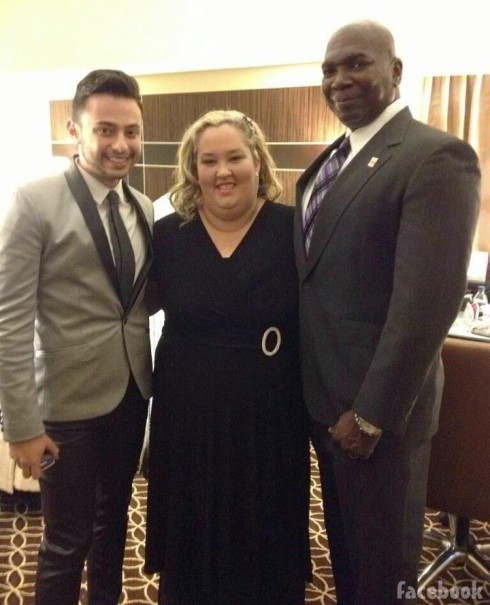 Mama June was looking quite beautimous after obviously slapping a little paint on the barn as well as a black dress and some seriously glitzy earrings! She shared the photo above on Facebook along with the caption, “Me and my dates ready for the red carpet at GLAAD awards”

Here are a couple more from those in attendance: 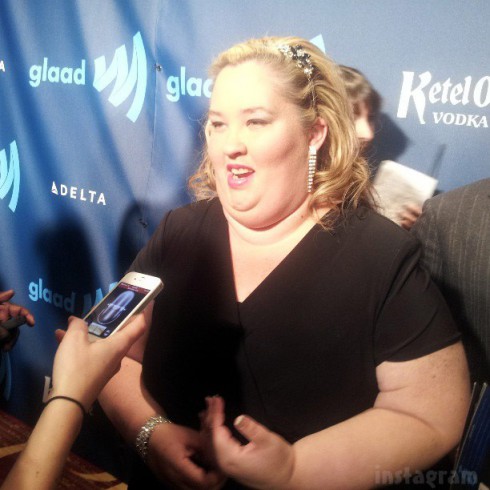 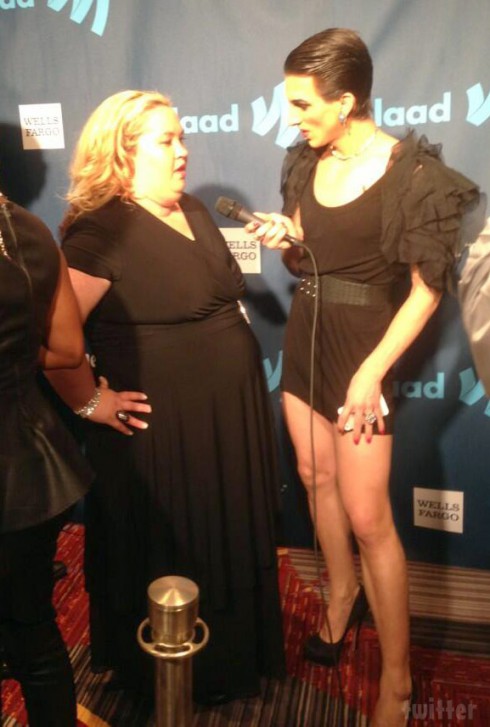 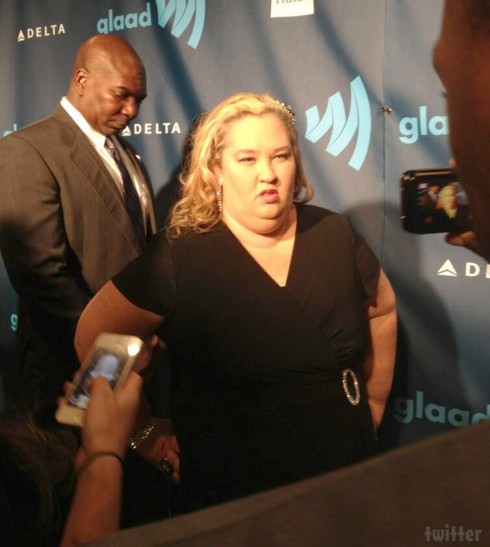 Gossip reporter Naughty But Nice Rob shared this next photo and wrote, “Look who I just had a chat with! Mommy Boo Boo” 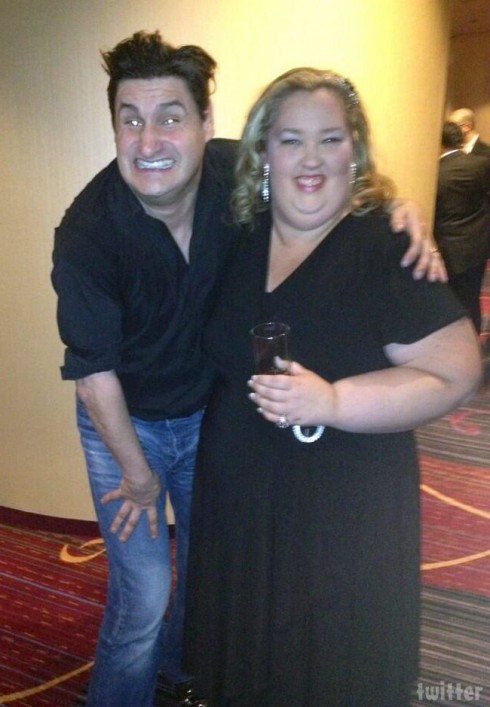 And another one of the “gals” shared by Snooki along with, “YES. We love Mama June ❤” 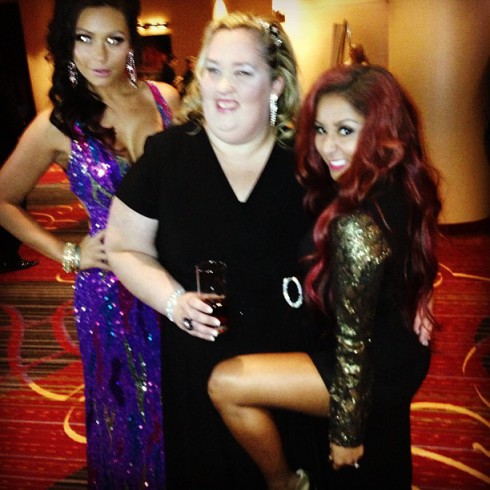 UPDATE – Snooki and JWoww weren’t the only Jersey Shore folks lucky enough to rub elbows with the one and only Mama June! Vinny Guadagnino got in on the action as well! 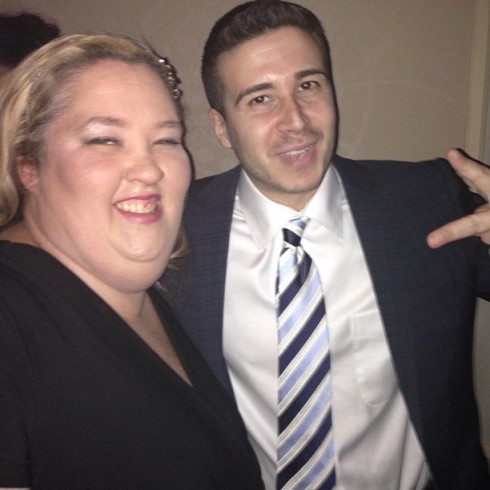 An excited June posted on Facebook just a couple hours before the event:

UPDATE – And an excited June posted on Facebook just after the event as well:

Well laying here thinking about tonight it was AMAZING even though we didn’t win in the reality show award the amazing race won but it was a HUGE honor to even b nominated meet alot of great ppl tonight and took alot pics and done a lil interview at the opening of the ceremony that was HUGE thanks tonight to all our gay and lesbians fans hope you had a great night it was all for u and bringing ppl more closer together and being more accepting of the lifestyle like i said on the red carpet its 2013 love who u want and b happy… if u got any pics with me plz post and yes we sit with snooki and jjwow and the emperor and emperoress(sp?) of new york in the gay community they where very nice and down to earth ppl great day it was a great experience for the first Time but im ready to get back home to my family ( MaMa June)

Here Comes Honey Boo Boo first caught the eye of the LGBT community when Alana’s (aka Honey Boo Boo) Uncle Poodle (real name Lee Thompson) was introduced and it was revealed that he is a gay man. Alana seemed completely comfortable with her uncle’s homosexuality and even famously said in an episode, “Ain’t nothin’ wrong with bein’ a little gay. Everybody’s a little gay.” Uncle Poodle is a gay rights activist in Alabama and later revealed he is HIV positive.

And not only is Alana accepting of gay people, she’s downright defensive! Well, gay pigs anyway:

Here are the other GLAAD Media Awards nominees in HCHBB‘s category:

Here are the four different criteria by which each nominee is measured:

Fair, Accurate and Inclusive Representations – Rather than portraying the LGBT community in broad stereotypes, the project deals with the characters or themes in a fair, accurate, and multi-dimensional manner. (This is different than a “positive role model.”) Inclusive means that the diversity of the LGBT community is represented. This includes economic, geographic, and political diversity, as well as people of color, seniors, differently abled people, etc.

Boldness and Originality – The project breaks new ground by exploring LGBT subject matter in non-traditional ways and handles the LGBT content in a fresh and original manner. Is this project cutting-edge?

Impact – The project impacts society in a significant way. Does this project dramatically increase the cultural dialogue about LGBT issues? Or, does this project reach an audience that is not regularly exposed to LGBT images and issues?

Overall Quality – A project of extremely high quality adds impact and significance to the images and issues portrayed. Fair, accurate and inclusive images can sometimes be weakened when they are part of a poor-quality project.

We will update as soon as we hear who won! (They BETTER redneckognize!)