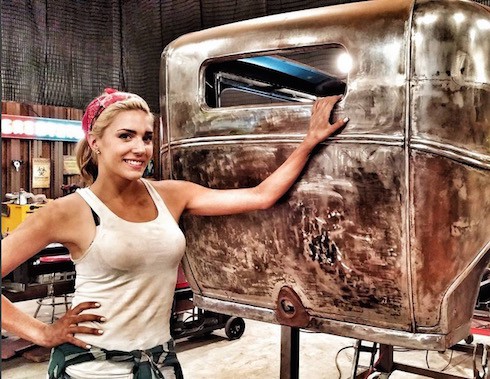 The newest member of the Vegas Rat Rods cast is also the show’s youngest–and, relative to her age, is possibly the most experienced as well. 25-year-old Cheyenne Ruether has been tinkering in the garage since she was just six years old, but has been working with cars and hot rods specifically since getting an apprenticeship in a Fort Saskatchewan SK body shop at just 16.

Despite her years of experience, being a woman in a field dominated by men means Cheyenne has still had to deal with more than her fair share of disbelief and incredulity. She recently told Autotrader that, whether it’s the men running the shop or the ones whose cars she’s working on, Cheyenne has “dealt with that [her] whole career.” Fortunately, she’s now at the point where the job she does is more than enough justification–a position that Vegas Rat Rods is sure to solidify:

Honestly, for most women it’s scary for them to go into a shop dominated by men. But it’s something I’ve been used to my entire life. The first shop I walked into was the same thing – all guys. At 16 it was hard. As years progressed I learned more and I got an insane amount of hands-on experience and I got used to it….I walk into a shop and don’t even say anything anymore. I let my work speak for itself. That goes a lot farther than talking about what you’re going to do. People sit there and think here’s this pretty girl walking into the shop and she doesn’t know what she’s doing and then I get in there and within a day their tune changes pretty damn quick. 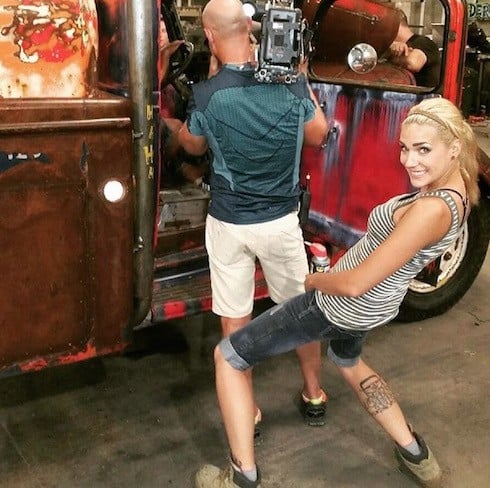 Indeed, as Cheyenne explained for the Fort Saskatchewan Record, part of the reason she auditioned for Vegas Rat Rods was to defy expectations on a bigger stage. “I looked forward to being on a show I already enjoyed watching with my daughter and applying a background in autobody to switch over and begin working on an entire new class of automotives,” she said, “[but] most of all I wanted to prove a like-minded woman could step foot in a shop like this, work shoulder to shoulder with any one of them and succeed.”

So the Alberta native brings a serious vehicular pedigree to Vegas Rat Rods, including–in addition to her years of experience in garages–certification as a Red Seal Journeyman Technician, plus a stint at the Northern Alberta Institute of Technology. But Cheyenne, in the fashion of someone with true hustle, doesn’t just work the automotive side of the garage. She’s also a seasoned model, one who’s worked the floor at auto shows…

…and been the focus of bikini-tastic magazine spreads (among many others!):

If you could go anywhere in the world where would it be ….??? #beach #fijiwater #islandlife #overseas #love #travel #wannagoback #model #workhard #aviators #warmwater #loveit #funinthesun #jetsetter #travelbug #international #cargirl

Frankly, given those two talents, it was only a matter of time before Cheyenne Ruether found fame using one or the other. Hopefully Vegas Hot Rods will give her the chance to do both 🙂

Finally, here’s a shot of Cheyenne with her aforementioned daughter, her boyfriend, and a few of the cars in her very own collection:

You can follow Cheyenne on Facebook here, and on Instagram here. Additionally, her professional web site, Shoot Like A Girl, offers booking information for Cheyenne–as well as a whole lot more photos of Cheyenne in action as a model and a custom car contractor.
Vegas Rat Rods Season 3 airs Monday nights at 10 on Discovery.