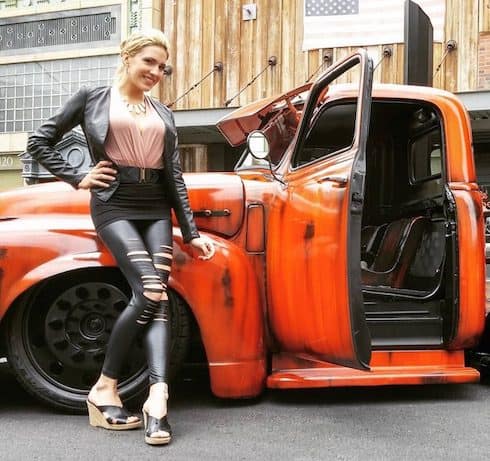 Cheyenne Ruether, the new addition to the Vegas Rat Rods cast for Season 3, has officially said goodbye to the show. Cheyenne confirmed she’s no longer a member of the cast at the same time that she revealed Vegas Rat Rods Season 4 is a go — in fact, it seems filming is already underway.

Judging by the way she shared the news, it doesn’t sound like there’s any bad blood between Cheyenne and the rest of the Vegas Rat Rods cast. When a fan on Cheyenne’s official Facebook page recently asked her if she’s not doing the show anymore, Cheyenne replied, “I am not 🙂 onto the next business venture.”

Then, when asked about who might replace her, Cheyenne let slip the news about Vegas Rat Rods Season 4. “No female or Canadian replacement for season 4,” she said. “Another older gent I have not met I believe started, they just began shooting it with a smaller production company based out of America to keep costs down.”

If you’re a Vegas Rat Rods fan and you’re not following Cheyenne on social media, you’re really doing yourself a disservice. Her Facebook feed alone has been a treasure trove of goodies over the last few months — like her peek at the very first episode *filmed* for Season 3, which for some reason has aired in Canada but not yet in the States:

And, in news related more to Cheyenne than Vegas Rat Rods Season 4, her boyfriend Jason Egan recently completed work on the world’s first Saw-themed escape room out in Las Vegas:

What an honor to have "Jigsaw" himself (@tobinbellofficial) at our Grand Opening last night! Great feeling to have the doors officially open after a year of non stop work on the Worlds FIRST Official SAW Escape Room!! Stop by the retail store at the end of your tour and get some of my exclusive new SAW branded products!! *swipe left* #saw #jigsaw #sawescaperoom #grandopening #lasvegas #celebrityapperance #teamwork #eganproductions #newventures #entrepreneur #nextlevelescape #traps #horrorjunkies #press

As usual for the restorer / mechanic / model / TV star, Cheyenne appears to have her hands full with a ton of different projects. We wish her all the best in her future endeavors!

Discovery has yet to even announce that Vegas Rat Rods Season 4 is filming, let alone hint at a premiere date. Until they do, you can stream Seasons 1 through 3 of the show here.