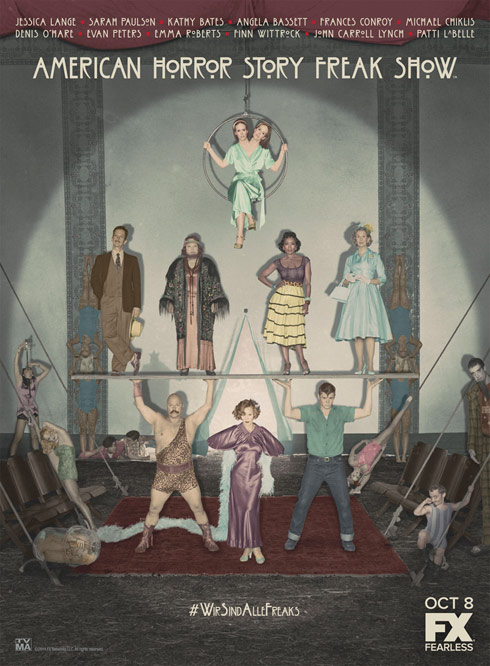 Wir sind alle Freaks, indeed! American Horror Story‘s devilish masterminds released the first piece of major art for the upcoming season of Freak Show — and, sheesh, I didn’t know it was possible to be any more excited!

The poster groups the mid-20th century era sideshow stars around their German ex-pat ringleader, Elsa Mars. (Hence the emphasis on “wir sind alle Freaks” in the promotions, which means “we are all freaks.”)

It’s a little difficult to make out the specific characters, so here’s a better look… 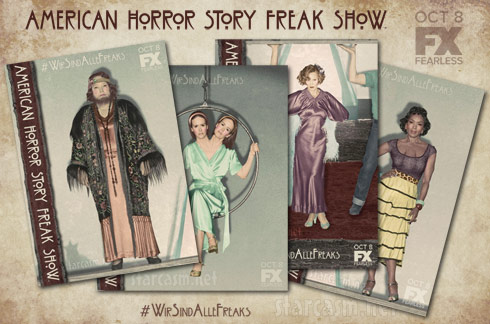 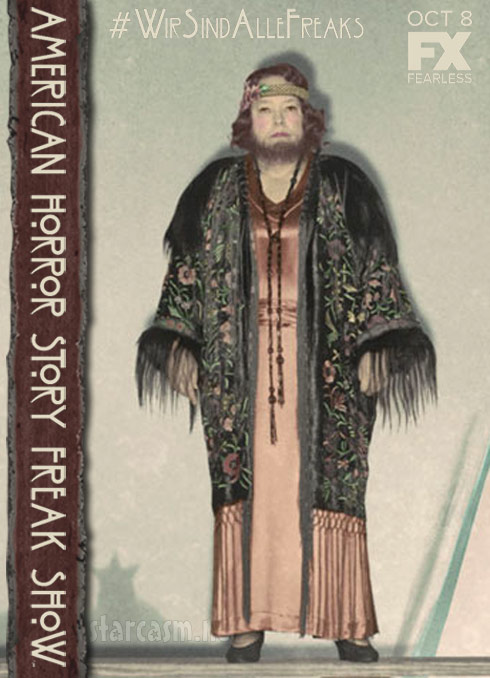 Kathy Bates, who just won an Emmy Award for her performance in Coven, is the resident Bearded Lady, Effel Darling. She is set to have a run-in with Wes Bentley’s character during the two-part Halloween special. 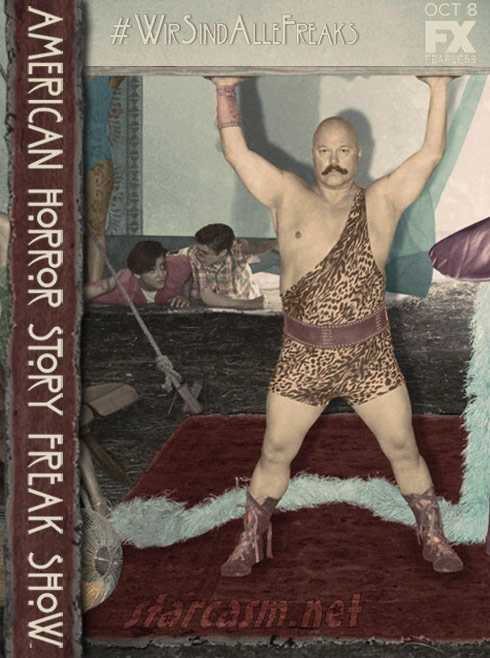 Michael Chiklis, plays The Strongest Man on Earth, Wendell Del Toredo, who was previously married to the Bearded Lady. 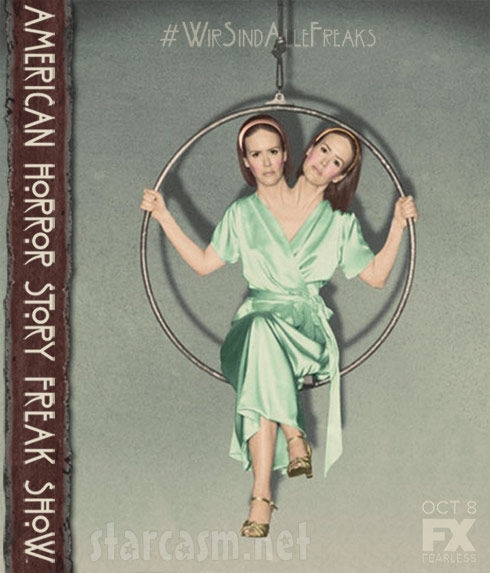 Sarah Paulson plays two people, conjoined twins Bette and Dot Tattler. I predict the ladies’ story will reflect the true one of Daisy and Violet Hilton, who were exploited for most of their lives before their manager ditched them at a drive-in theater. 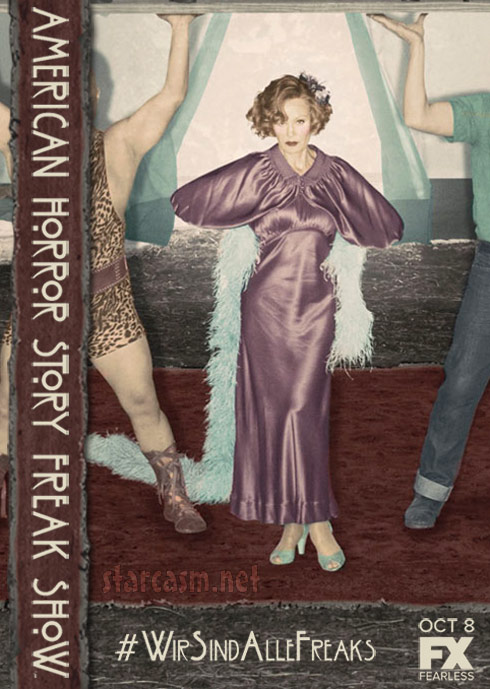 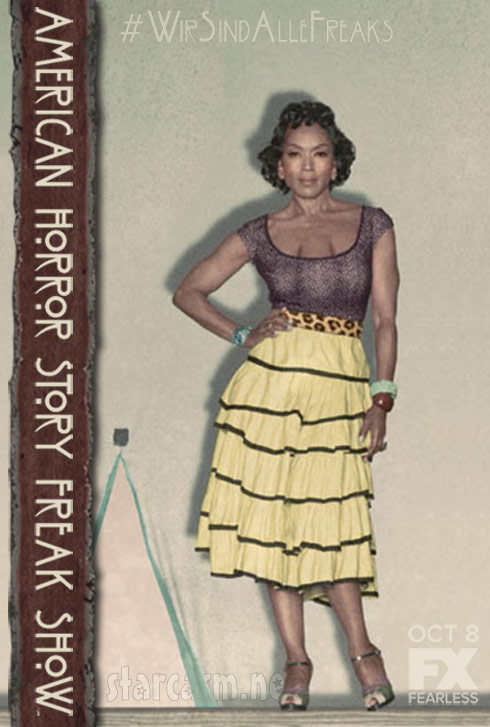 Angela Bassett is Desiree Dupree. Not much is known about her character, but Huffington Post noted it looks like she has three breasts. (FX declined to confirm.) 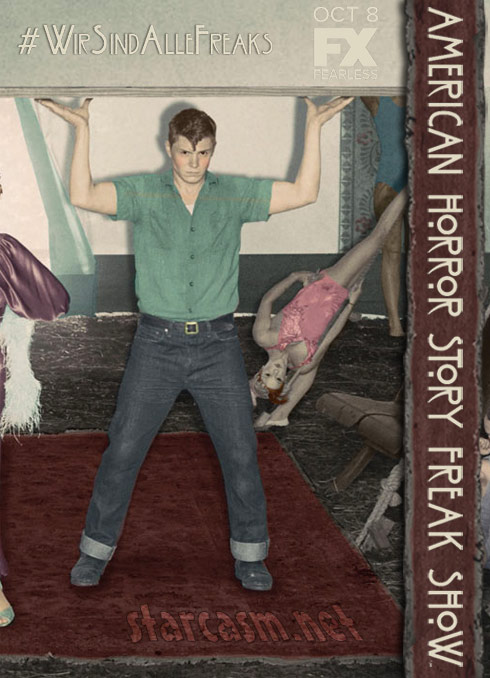 Evan Peters is Jimmy Darling, which leads me to guess he’s the son of exes Effel Darling and Wendell Del Toredo. That explains why he seems to be pretty strong. 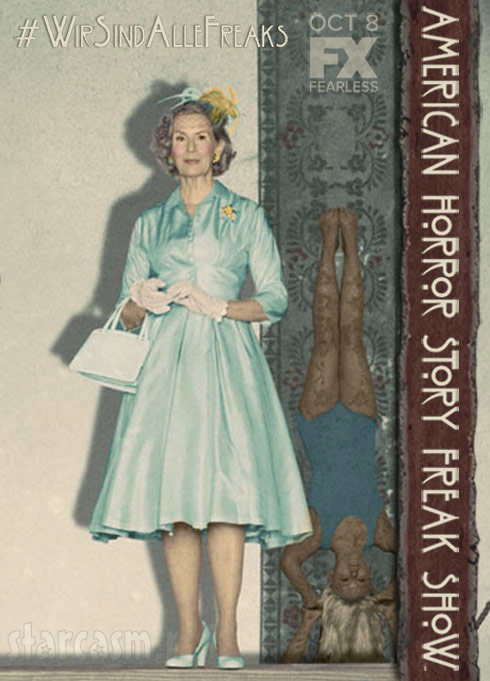 Frances Conroy doesn’t have any readily apparent traits that would qualify her for a freak show. In fact, the creators haven’t even shared her name. 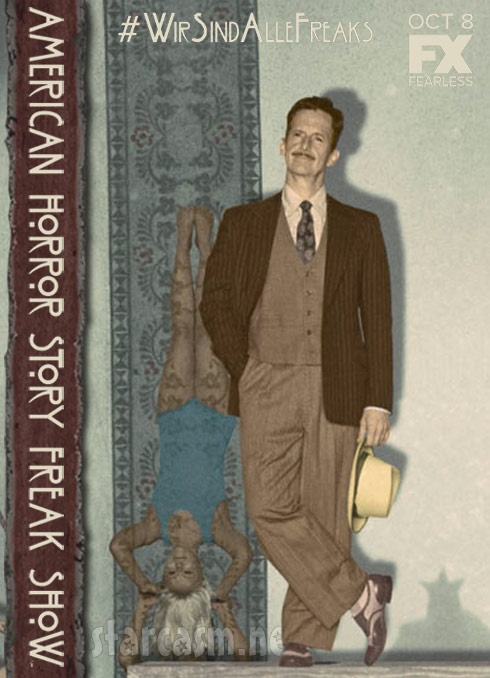 Dennis O’Hare is also a mystery at this point, even though he’s included on the top left part of the platform. Based on his business attire, I wonder if he’s the financier or something along those lines. (No doubt he has some dark secret. That’s just how creators Ryan Murphy and Brad Falchuk roll.)

We don’t know much about Emma Roberts’ character, either, which makes it hard to pick out where she is on the poster: She may be one of the women doing the splits or the one pulling a sword from her throat. The one huddled in the cage in the foreground doesn’t appear to be her, based on this new teaser…

Will there be a three-legged girl on American Horror Story: Freak Show?

Details on the third season of American Horror Story: Coven